Hot Weather in Truth or Consequences, Then Up to Santa Fe National Forest! 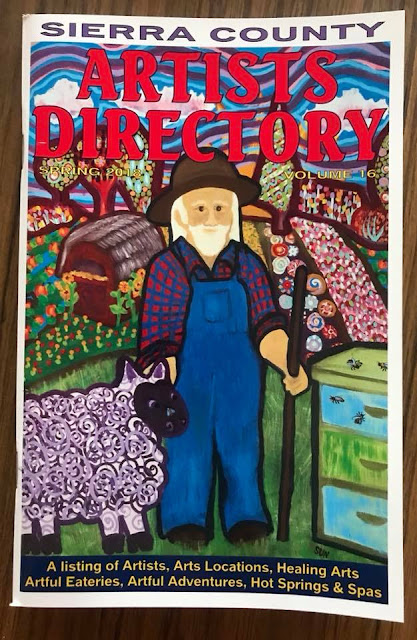 My painting on the cover of the Artists Directory

After getting back from Florida, I hung out in Truth or Consequences, NM, for a few weeks.

Some significant things happened during that time.  First, I had been keeping secret for a while that one of my paintings, "God as Explained by a Four-Year-Old," had been selected to appear on the cover of the Sierra County Arts Council's Artists Directory 2018.  This is a great honor that has already brought some attention to Sun Gallery and has made me think about painting more fantasy folk art portraiture. 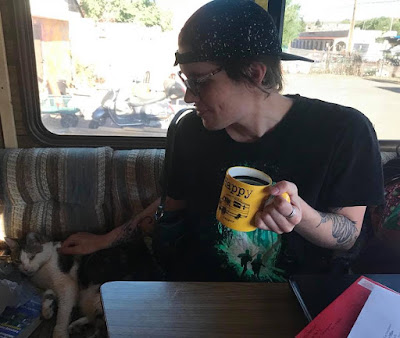 Sly came over for coffee first thing on Mother's Day!

Second, my daughter Sly came to live in TorC!  I am so happy about this development.  I wasn't sure if I would be, because what if she couldn't find work and housing right away?  But that was no problem.  Sly was working at Passion Pie Cafe and had a little studio apartment (beyond her means up in Seattle, but affordable here) within eight days of arriving.  Sly is also being extremely helpful to me in my gallery, doing some sign painting, challenging cleaning jobs that require getting on ladders, etc.  An additional part of this happy story is that Sly's girlfriend Charlie will also be moving to TorC very soon.

Some of Sly's paintings from her first art show

I spent a few weeks staying at some of my favorite campgrounds around TorC and then moved behind the Gallery for a few days during my monthly Art Hop opening at Sun Gallery.  This month we featured some of Sly's paintings that she'd brought down from Seattle.  Her work is gloomy and cool, and two paintings sold. 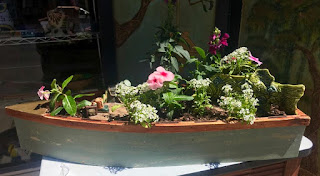 May was also Fairy Garden Month at Sun Gallery.  I made some gardens, sold some planters and figurines from my Fairy Garden Center, and had a Fairy Garden Tea Party on Mother's Day.  As a full-time RVer, I find it really fun to get my hands in the dirt once in a while, and fairy gardens (miniature gardens with houses and other features that  welcome any fairies who happen along) are a great way to satisfy my need to garden.  I think I will also get a little cactus for Brownie, now that we have consistently hot weather. 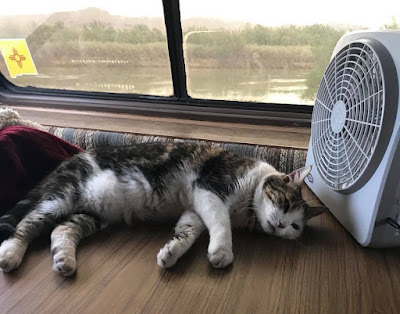 Speaking of which...this will be my first summer in New Mexico when I haven't had an RV park site to come back to where I can hook up to A/C whenever needed, which is pretty much every day from May through August.  The 100-degree temps kind of scared me for a while.  I was trying to picture how I would deal with it, because I'd really prefer to stay someplace prettier than the parking lot behind my art gallery.

However, one day I had a little scare, and it changed my feelings about this.  I was staying on the Rio Grande about six miles from downtown TorC and I got a stomach flu.  I'd planned to drive back into town and hook up to electricity at the gallery, because the afternoon temp was supposed to be near 100 degrees.  I called Steve and said I might need his help getting back into town before it got very hot and uncomfortable.  He and our friend Claudia came out immediately and saved my about-to-be-sizzling bacon!  Back in town behind the gallery, I could use the A/C while I rested and recuperated.

Now my feeling about staying behind the gallery is--I am one lucky artist!  I can stay there and get lots of work done, any time of the day or night, and be safe from overheating the cat and myself.  Many of my artist-on-wheels friends would love to have my arrangement, and I am full of gratitude. 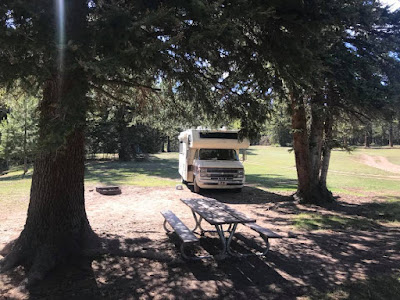 Speaking of traveling creatives...after Art Hop/Hot Springs Festival/Mothers Day weekend, I left for northern New Mexico to meet up with members of the Rubber Tramp Art Community.  We are an intentional community of nomadic artists that first met just four months ago at the Rubber Tramp Rendezvous in Quartzsite and have since formed this community.  If you are interested in participating, you can join our Rubber Tramp Art Community (RTAC) FaceBook page.  We are planning our next gathering in late July-early August in northern Arizona.

I left TorC a little over a week ago.  The first night, I only went so far as the Socorro Walmart, where I spent the night along with about a half-dozen other RVs and got provisions for the journey.  We'd planned to have potlucks and a couple of theme nights (baked potato night and chili night), so I had to think about what I could make for a group.  It's funny how when I was not all that much younger and had a family to feed, I could effortlessly make menus and shop for an entire week, but now I am challenged at the prospect of cooking for more than one or two people. 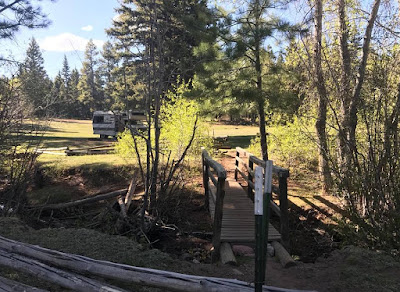 I was close to a little creek and bridge

The next morning, I continued up I-25 until it was time to veer northwest on Highway 550 north of Albuquerque.  Then I went east on Highway 96, where I stopped at the Coyote Ranger Station in the Santa Fe National Forest and got detailed maps that guided me up to the Resumidero Campground.  The drive up was about 10 miles of dirt roads, with many more dirt roads heading off from the one I needed to keep following.  It was a little tricky, but one of our members, Sarah Meg, really scoped it out and gave us good directions. 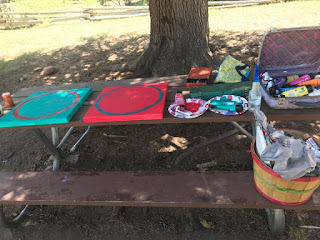 This 9000-foot altitude campground was definitely worth the drive.  It's several wide open meadows surrounded by forest.  Equestrian groups use it pretty heavily in the summer, but we saw only cows, cowboys, and a few other campers.  Mostly it was our group of 10 people who spread out and filled up about one-and-a-half of the meadows.  We were also near a spring, where we went to do some plein air painting under the able tutelage of Bob Ross-certified instructor Wendy, who was later named Camp Princess (a completely positive nickname!).

We set up a place where we gathered for two or three activities a day.  We had a daily morning meeting where we worked some Artists Way and other spiritual exercises.  We sometimes had a class or activity in the afternoon.  Danielle taught us how hand sew our own travel journals or sketchbooks.  (She makes her own watercolor sketchbooks for about a third of the price of buying them!)  I repeated my Easy Mandala Drawing class from the RTR.  Some afternoons we just did our own thing.  And then there was dinner.  Oh, boy, was there ever dinner!  What a bunch of food artists we have in our group.  Healthy and delicious potluck meals every single time.

I didn't take a lot of pictures of the people who were at this gathering because the whole thing felt very personal and private.  But it's really not--we'd love to include more nomadic artists who seek peaceful community. 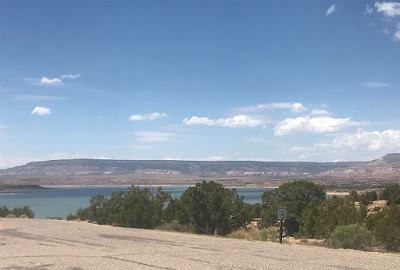 I started a couple of paintings while at camp and got loads of ideas for new ones.  Now that we have adjourned, I'm resting a bit at the Corps of Engineers Riana Campground on Abiquiu Lake.  I suffered a little every day from altitude sickness while I was up at Resumidero, and after less than 24 hours down here at 6400 feet or so, I'm feeling much better.  More energy, less headache, fatigue and blahness.  I'm going to stay here one more day, then explore some nearby Georgia O'Keeffe history sites, and then head up to drive some roads in southern Colorado that I have never taken.

And now I have to go, because the RTAC camp decided to move down from the mountain and join me at the lake!  Right on!  The fun continues... 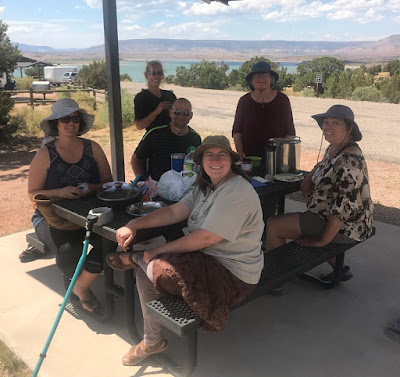 They found me!  Sign up for Rubber Tramp Art Community, and you can find me, too.