Me, not using a cane or other assistive walking device

It's five days since my arthroscopic knee surgery and I am walking some of the time. I only had to use a walker for one day, then a cane for another day, and after that I did not need to lean on anything.

I did, however, overdo it the past two days. On Sunday I walked a block-and-a-half to Black Cat Books and Coffee and then got a ride home, but it was too late. I'd already overdone it. So I spent the rest of the day asleep and had to resort to taking a pain pill in the evening again, after having gone all day without.

Did I learn from this? No! I was sure yesterday would be better, so I walked not only to Black Cat, but also a few more blocks to the Post Office and then home again. After all, if a block-and-a-half is too far, what more harm can I do myself by walking eight blocks? Hmm. Quite a bit, it seems. My knee got swollen up and sore, and I had to take pain medication in the afternoon and at bedtime.

Today is a new day. No walks for me. I am staying at home all day. This is hard. I'm a social person. I like my routines, especially the ones I've developed here in TorC. I want to get back to those days when I could just hop on my bike and fly over to the Post Office and then breeze downhill to the thrift store to see what old thing is new. But such whims and impulses require good knees. 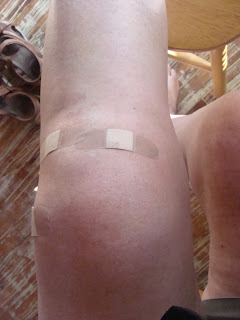 There's no way to take a pretty picture of your own knee. But this photo shows that the surgery left me with just three little holes and some swelling.

Being housebound leaves me with whims and impulses that occur only in my mind--such a dangerous place to spend time alone. But it's also given me time to think through some lingering unsettledness about my past. (Yes, I am making up words now...this is what happens when I'm home alone.) I've come to understand some things about my childhood, my young adult years, and the 20 years I spent in a sad marriage. I'm appreciating that I've come out of all of this as a person who is pretty good inside and out--loving, caring, kind and increasingly respectful of myself and others. And I'm letting go of regrets over the years I wasted as a drunk and as an unappreciated spouse. Maybe I needed two decades of active addiction and another two decades of being sober but unhappy in order to be exactly where I am today--a happy, sober woman with a peaceful life, who only needs to let her knee heal a bit so she can once again zoom around on her bicycle. 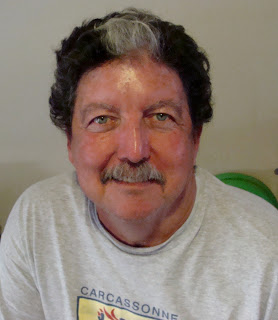 My boyfriend Steve and I have started talking about all sorts of new adventures that we might share. He is a free spirit. We have both been in TorC only a short time and we both love it here, but the road is beginning to whisper in our ears again. I see this as a time to rest and regroup, but I'm getting ready to redeploy. Probably not on a long-term basis, but from time to time, using TorC as my home base. I've thought of starting a teaching art studio here, but it isn't the time for me to be that tied down. I am a youngster of 56 and still have a lot to see and do, especially now that I've finally learned how to live one day at a time. 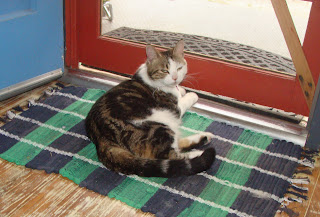 Sonja in the doorway, enjoying the inside and outside at once

My cat is a good teacher of living in the moment. This morning I watched her intensely pursue a ball in the courtyard, but then, while crouching to attack it, she discovered some tasty grass to chew on and she relaxed and forgot the ball. That's kind of the way I am with this idea I have about starting a little art school. It's a great idea. I may pursue it sometime. I may have other things to do first.

For now, I'm Snoozy Suzy, and I'm off for the first siesta of the day.
Posted by Unknown at 8:24 AM 5 comments:

There will be no pictures accompanying this blog post, because I'm a gimp these days and am not getting out of the house except for necessary stuff like work, medical appointments, and the occasional errand or social event. No wandering around aimlessly on foot or bike lately, so I haven't had my camera anywhere interesting for a while.

About 45 years ago, I acquired the nickname "Sorny" first at school, later at church camp, and then I used it as my Girl Scout camp counselor name into my 20s. It's short for Sorensen, which was my last name before I decided I'd rather be Sue Soaring Sun. I wonder if there was something prophetic about choosing the name Sorny, because in my dotage I have had nothing but trouble with my knees. Shoulda picked something like "Goodny" instead, I guess!

I noticed that Facebook friends of my nephew Eric also call him Sorny. Eric, tell 'em to stop, quick!!! You're not getting any younger!

A few weeks back, I blogged about going off-roading with friends and it was a wonderful time except for one brief moment when I was climbing out of the back seat of a small vehicle and felt some horrible pain in my left knee. The right knee is made out of Titanium and is more reliable than my left knee. I had it replaced about four years ago. After the painful exit from the back seat of the Trekker, I switched seats so I'd put my weight on the bionic knee while getting out of the car.

For a few weeks after that, I had intermittent pain in the left knee, but it felt okay if I didn't push it too hard or sit or lie in one place too long. Eventually, though, the pain got constant and more intense. On the day I could no longer get on my bike, I called the local clinic and made an appointment to see the doctor the next day. He ordered an MRI, which showed that I have two torn menisci.

There are no orthopedic surgeons in my small town of Truth or Consequences, so tomorrow I am going down to Las Cruces to see a specialist and he will schedule me for arthroscopic surgery. This will be a day surgery and I'll only miss about a week of work at La Paloma Spa. What he'll do is make tiny incisions to insert an arthroscope, which has a light and camera, and surgical tools. He'll basically shave off the bad parts of the menisci, which are arc-shaped pieces of cartilage that act as a cushion between the shin bone and thigh bone, and clean up any other problems he sees while he's in there. Hopefully there will be plenty of cartilage left so that I won't eventually need to have this knee replaced, but he'll get a better idea when he sees it close up.

I had this same surgery on my right knee about a year before my total knee replacement, but it wasn't successful in relieving my pain, swelling, stiffness, etc. I hope this one is! It's a lot easier surgery than a knee replacement, which has a long recovery time.

I've been taking pain meds for about 10 days now and I am really sick of them. I wish I could just get by on over-the-counter Tylenol or Advil, but it just doesn't help enough. The prescription pain meds make me feel sick to my stomach a lot of the time, so I've mostly been staying close to home while waiting this out. I'll sure be glad when this is over. I hope my surgeon is not too busy and can fit me in for surgery pronto!

In the meantime, I am feeling enormous gratitude towards my VanDweller friends Brian and John, who have taken me to the grocery store and other places I've needed to go. John is taking me down to Las Cruces tomorrow, and both guys said they'd try to be available for whenever the surgery happens. Also, my new boyfriend, Steve, may be back from Arizona by the time I have surgery or at least while I'm still recovering, and I know he'll do all he can to take good care of me. The women from my 11th Step meeting are planning to bring a meeting and game night to my home after I have surgery. Other friends have promised to bring me some entertaining AA speaker tapes to listen to, since I probably won't get to a meeting for a few days. Also, my best friend back in Washington State, Helen, has been through all the same knee stuff that I have, and more, so she is a wonderful listener and help to me.

So I'm sure your ears perked up when I mentioned having a boyfriend, and I won't get away with just mentioning his name and not giving any more information. Steve is the nicest guy I've ever dated. We haven't had a chance to date much yet, because about the time we decided we liked each other, he already had some commitments in Santa Fe and Tucson, so he's been on the road more than he's been here since we started seeing each other. However, he'll be back to TorC this coming weekend and is going to rent a place and stay here in town so we'll have lots of chances to get to know each other better. We met in an anonymous program for recovering drunks, where we are both old-timers with lots of years of sobriety. Steve is serene, kind, gentle, generous, smart, fun, good-looking...I'd need to get my thesaurus out to completely describe what a nice man he is. We both deserve a great relationship, and I'm glad we've found each other.

I'm off to make myself a protein shake, which is one of the easy foods I really appreciate on these pain meds, and then John is going to drive me up to the movie theater to see the latest Harry Potter film. John is a fantasy writer himself and has followed the entire Harry Potter book and film series, so it will be fun to go with him, and I so appreciate not having to walk or drive myself to the movie theater.

Wish me luck tomorrow when I see the surgeon! Let's hope he can fit me in for surgery as soon as this week!
Posted by Unknown at 3:30 PM 7 comments: