New Work, and Some Thoughts About the Summer

Steve's altar--you should see the cat jump when he plays the singing bowls!

It's that time of the winter here in the Senoran Desert that I begin to feel like one of the luckiest people alive.  I read about snow deluges in other parts of the country, while here it invariably turns into shorts and T-shirt weather every day by noon.  I have a quiet routine of getting up at sunrise, having coffee and thinking thoughts, doing artwork, selling on eBay, cooking good meals, sitting outside with a book, and being semi-social, then turning in around 9:30ish.  Life is good and simple. 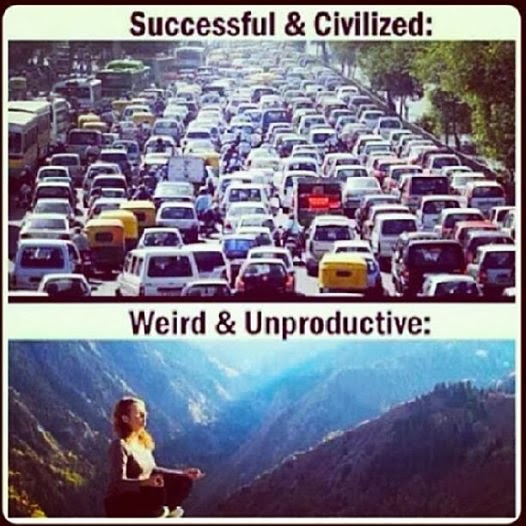 This past week our friend Janice came from Truth or Consequences, NM, to visit for about four days.  It was great!  I showed her around the area a little bit, and we played lots of games of Quiddler (a rummy-like card game, with alphabet cards, where you make words instead of runs or three-of-a-kind) and we had bonfires every night.  I decided to take a few days off from my strenuous routine while Janice was here, so it kinda felt like being at summer camp with a good friend. 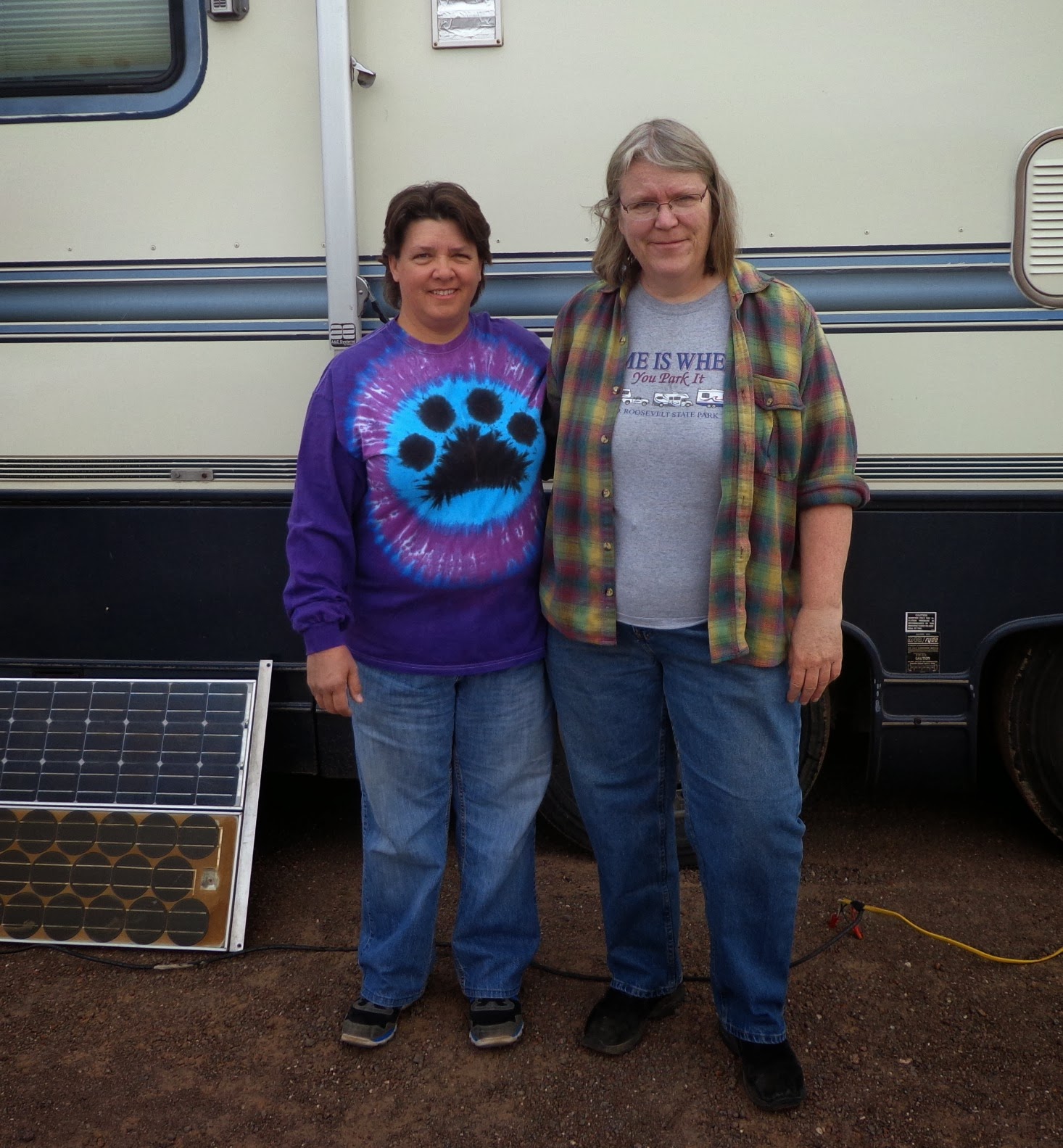 Janice and me in front of the Beluga

Artwise (apparently not a real word 'cause it's got a squiggly red line under it), I continue to work on boxes, plus I'm painting for an April-May show at January's in Truth or Consequences.  I'm painting scenes from my own life, some pivotal moments when something inside me came alive.  Sometimes it's hard and I don't want to do it, so the mixed-media boxes are a welcome break, like going outside for recess. 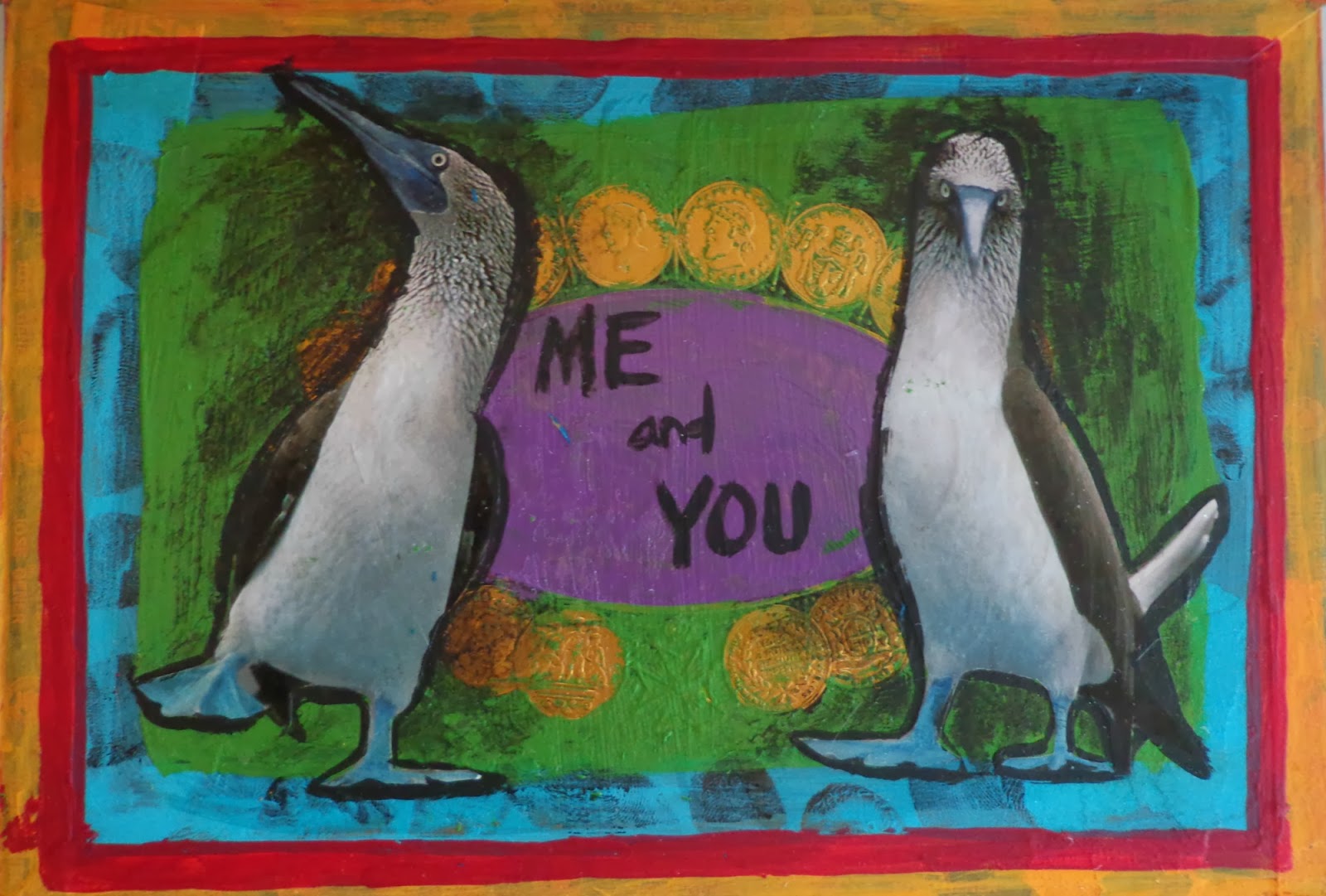 Here's a box I made for Steve for Valentine's Day.  It's decorated inside, too,
but that's a secret.

So, the only thing that's not going well in my life, which I haven't talked about much here in my blog, but which my closest friends know, is that my left knee is almost useless these days and I really, really need a knee replacement.  I haven't had health insurance since 2012 or so when my ex's COBRA premiums became too burdensome, and then I was turned down for insurance due to pre-existing conditions (I had arthroscopic surgery on this same knee in 2011).  I've been limping along for about 2.5 years since this knee became a debilitating problem that causes severe, chronic pain.  Now it's gotten to the point where I can barely walk, so I'm finally turning to some social services to get some help.  I'm hoping to get onto some health insurance within the next few months, probably through the State of Arizona, and eventually get this surgery done.  We'll see how it goes!

A mixed-media wooden champagne box, with hinges and clasp

In the meantime, I think Steve and I will be staying in Arizona for the late spring and summer this year rather than going to New Mexico as we usually do when the weather is nice over there.  As I'm being considered for several programs, I'll need to maintain an Arizona mailing address and presence.  So we're thinking of heading up to Prescott!  I've only been there once, but liked the look of the place and have heard so much positive about it from other travelers.

That's pretty much all the news.  No picture of Sonja this time--Steve rang his chimes and she skedaddled!

I Was Interviewed for the eBay Scavengers Podcast! 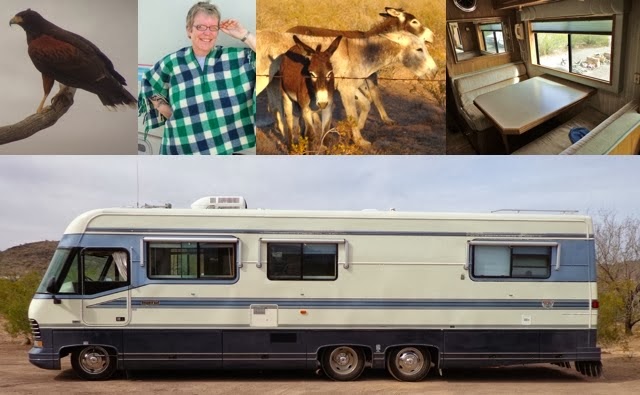 A few days ago, I had a really nice time talking on the phone with Jay and Ryanne Dedman, the eBay Scavengers.  They are really nice folks who moved to a rural area where living was cheaper, and they make their living by selling stuff they find at auctions, yard sales and thrift stores.  They also grow some of their food and make things, and they're friends with my friends Wendy and Mikey of Holy Scrap and Good Life Lab fame.

Our phone call was recorded and edited and became the Scavengers' latest blog and podcast post (#91).  For about two years, the Scavengers have been blogging about all different aspects of eBay selling--where to find inventory, how to sell, how to pack and ship, etc. A lot of their blogs and podcasts are about the eBay selling lifestyle, and they've featured Wendy and Mikey in several.  For easy reference, there's an topical index.

Jay, Ryanne and I specifically talked about my eBay business, operated out of the Beluga, a 35-foot Class A motorhome.  They wanted to know where I find my inventory, how I decided to concentrate on selling vintage scarves, how I ship while I'm on the road, etc.  The podcast lasts about 20 minutes and I hope anyone who is considering selling on eBay while traveling will find it helpful.  (I'm also working on a book, but it is not finished--you will definitely be able to read all about it here when it is published!)  To activate the podcast, just click on the "Play" triangle button that's under the photo of my RV.

Update from a Norwegian-American Sitting Quietly in the Desert 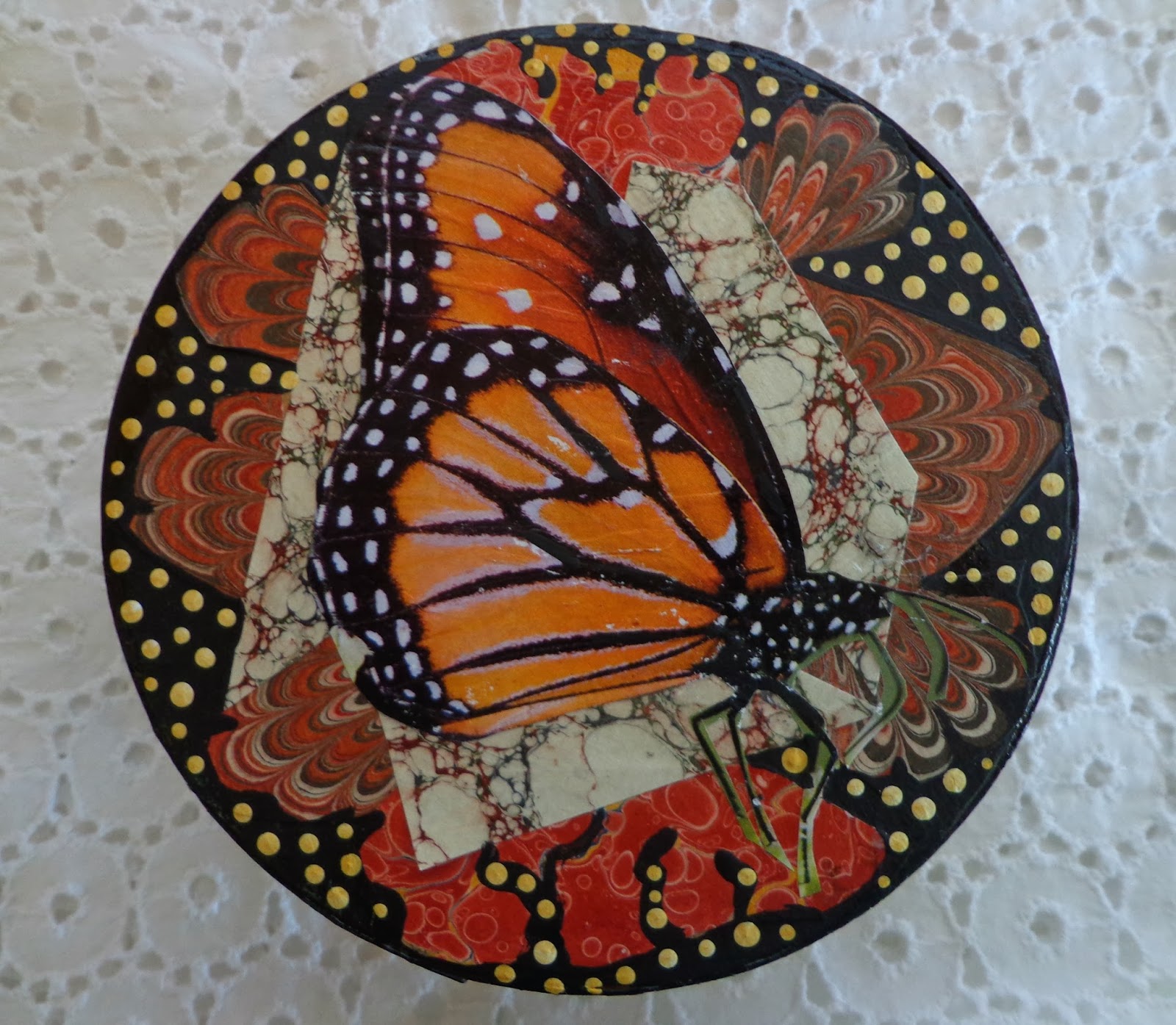 I'm continuing to do mixed-media decoration of little boxes, journals, shrines, altars, etc.  All of the small places where we keep God.  I find nice wooden, cardboard or tin boxes at various thrift shops when I'm out looking for eBay fodder.  I also find some pretty great magazine photos, wrapping papers, scrapbook papers, etc., in my wanderings. 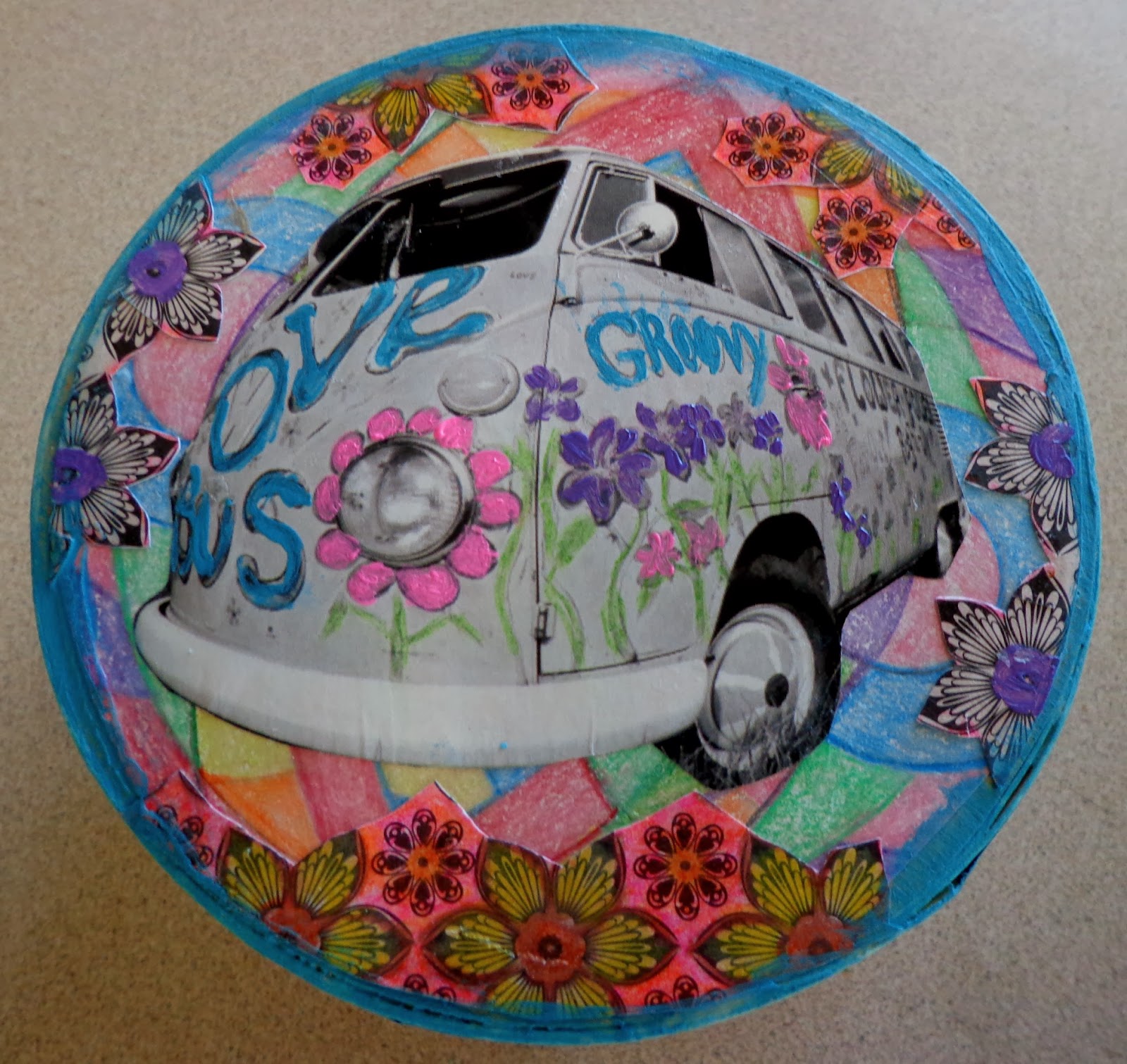 These boxes are for my "Faces of God" show at RioBravo FineArts gallery in Truth or Consequences, New Mexico, at the end of 2014.  There will be a table in one corner of the gallery with an installation of dozens of little boxes.  The other pieces for the show will be BIG. 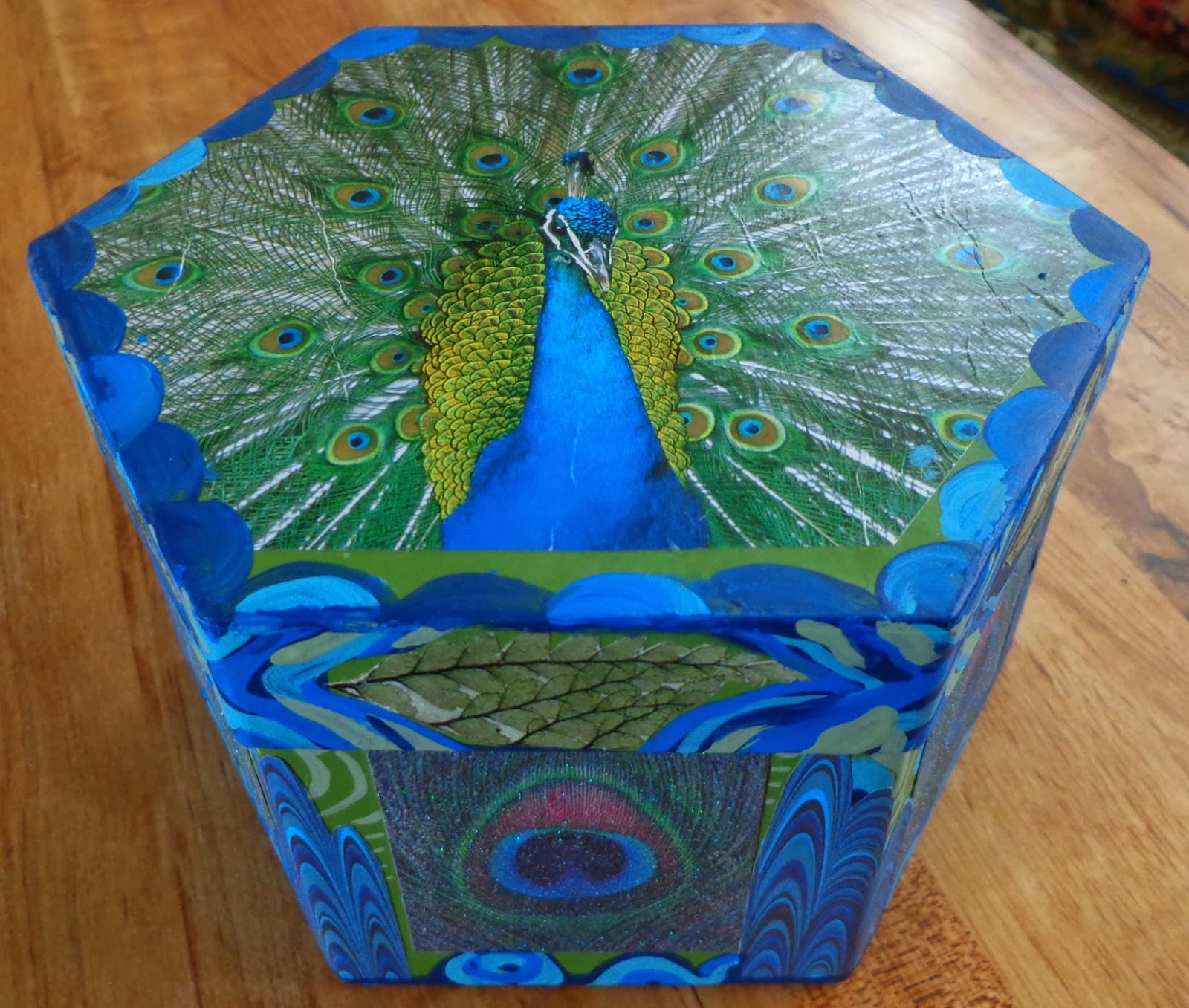 This peacock hexagonal box attracted some attention when I showed it to my FaceBook friends, so now it's in the mail to Joe Possley, a friend from my college days back in Wisconsin in the 1970s. 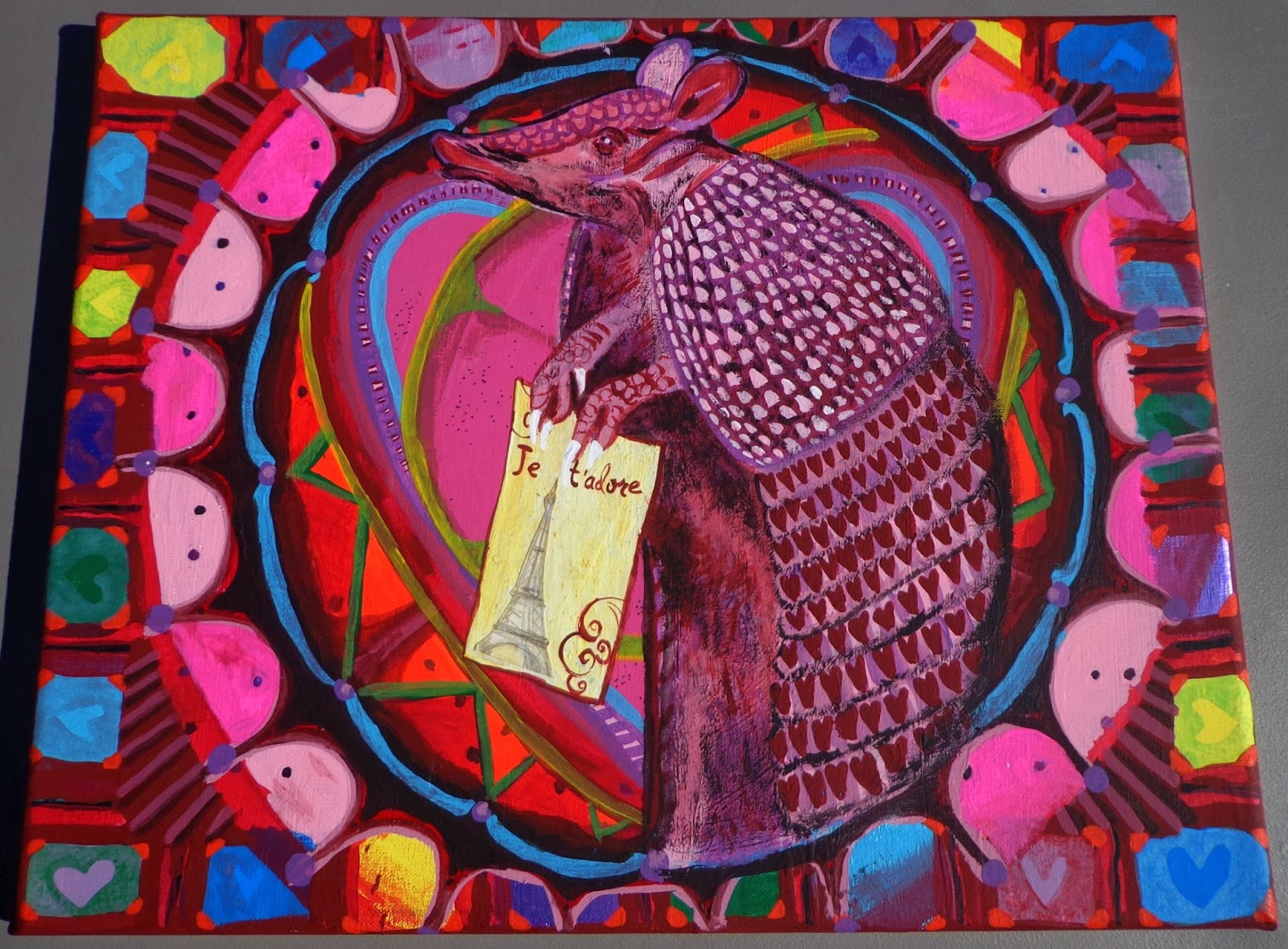 This mixed-media mostly-painting is called Amour-Dillo.  It was suggested by my friend Cindy Mitchell, who knows how much I like to paint animals weirdly.  I'm entering it in The Red Show in Ajo, Arizona.

Ajo is 10 miles north of Why, and it's where we go to buy groceries, get library books, mail my eBay packages, etc.  There is a lively arts community in Ajo.  There aren't as many opportunities to show work as there are in Truth or Consequences, because there are few galleries.  But the community definitely supports its artists.  The International Senoran Desert Alliance (ISDA) rehabbed the old Curley School into artisan apartment/studio spaces.

Besides doing artwork, I've been having a little more social winter here in Why than I have in past years.  As I mentioned in my last blog, several TorC friends have camped here at Coyote Howls, and my friends Susan and Dan from Eugene, Oregon, visited for a few days.  I've also gotten to know Michael and Pam, a couple from Albuquerque who are new to RVing--they also happened to stay at the Artesian, the same place I was in Truth or Consequences, but I missed meeting them there.  The longer I stay in this area, there are more parallels and ties between TorC and Why.  I look forward to my friend Janice coming to visit me from TorC next weekend. 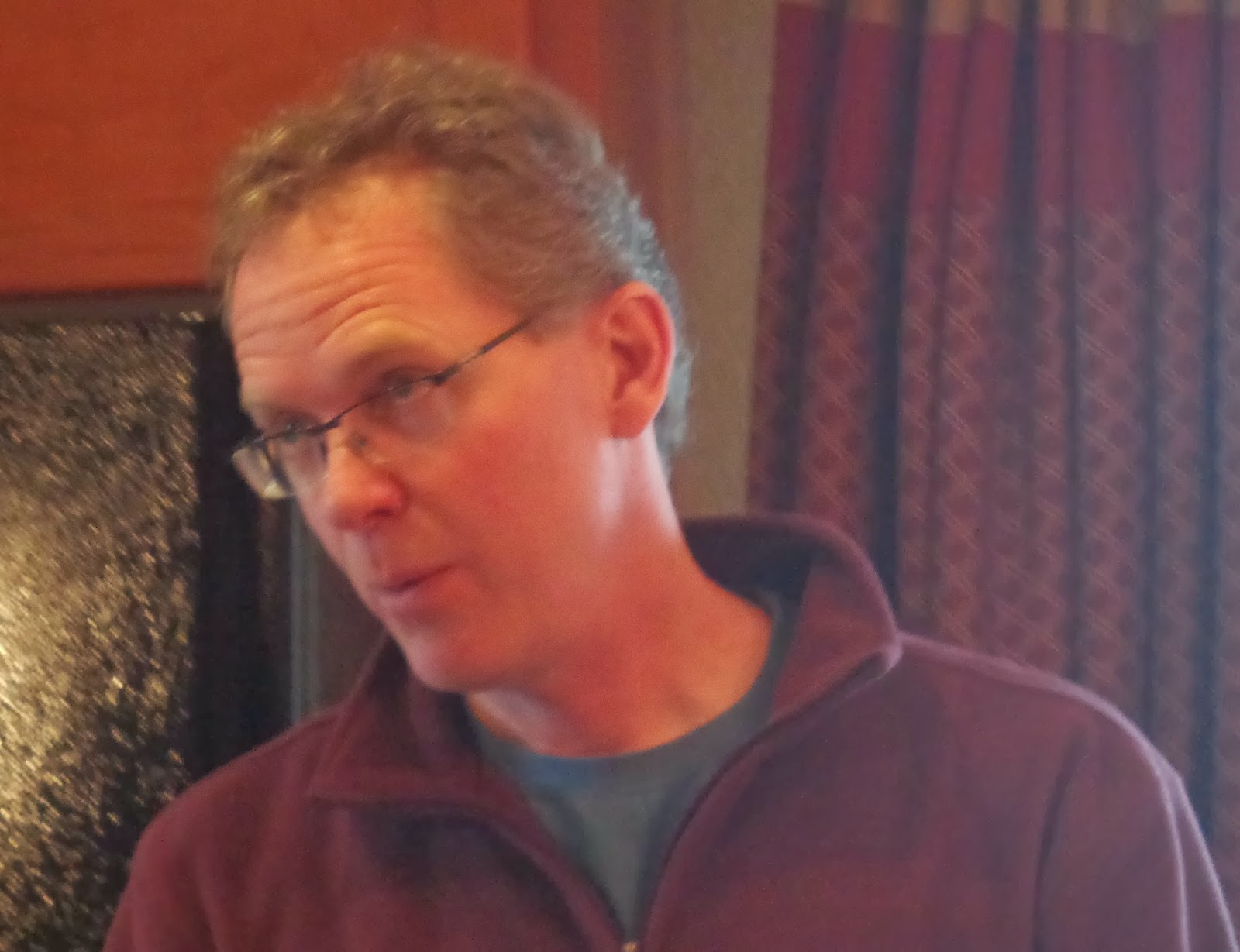 I've been up to Phoenix a lot lately.  Five trips up there in about a month.  Really a lot for me, since I prefer to sit around by myself most of the time.  I ran across the perfect meme on FaceBook to describe my attitude:  It's not that I'm anti-social, I'm just pro-solitude.  But I needed new glasses, which took a couple of trips, and then my younger brother Sheldon, his wife Lori, and their four younger children were vacationing at a resort in Peoria, so I went up to spend some time with them.  In the picture above, Sheldon is whistling and acting innocent.  I can't explain why.

Here's a picture of most of the family--Andy (14), my sister-in-law Lori, Elena (16), Charlie (the small person turned away from the camera), and Sheldon. 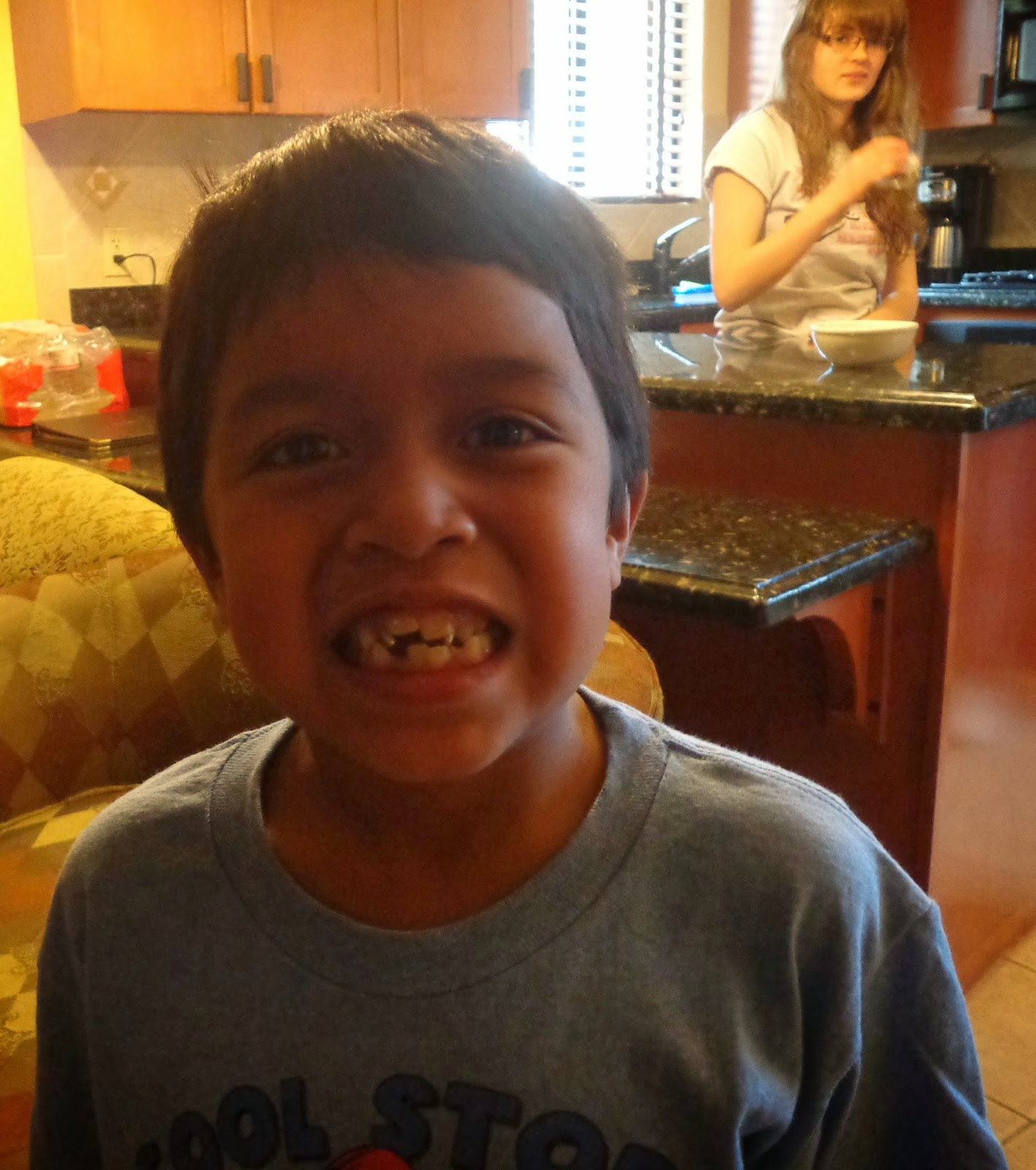 Here is a picture of seven-year-old Charlie, whom Sheldon and Lori began to adopt when he was an infant and were finally able to bring home from Guatemala last year.  Lena is in the background.  Charlie's favorite thing is to tickle and be tickled. 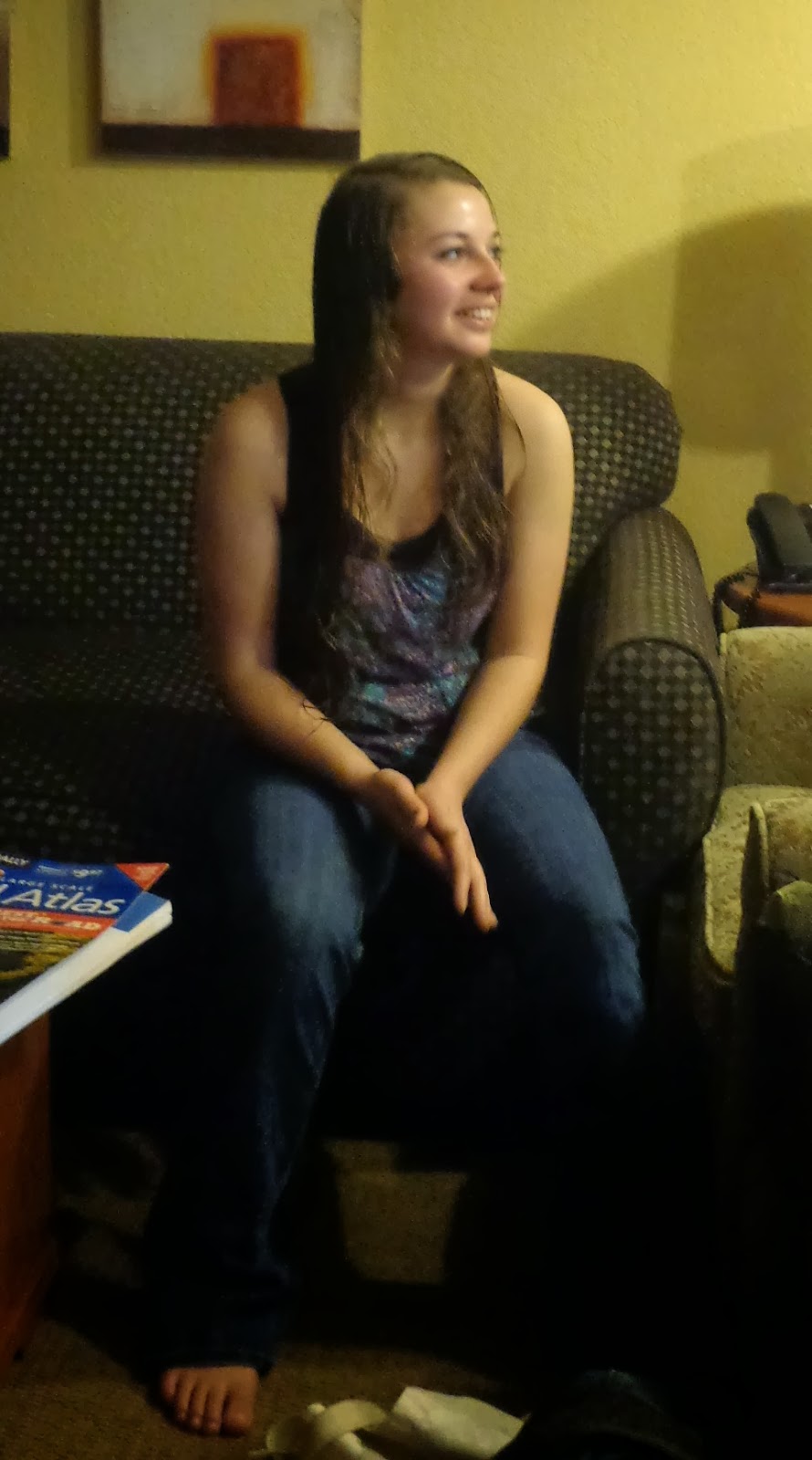 Val (age 18) did not make it into the family picture in the kitchen because she'd been working out and then showering.  Sorry about the wet hair pic, Vali!

On my latest trip to Phoenix, when I visited with Sheldon and family, I also got to have lunch with Roxanne of Good Luck Duck fame!

I've been keeping busy with eBay in addition to artwork.  Yesterday I mailed out some borderland cowboy boots to a New Yorker.  I'm trying to stay focused on work right now, during this quiet time in the desert where I have good Internet access thanks to the cell phone tower at the nearby Border Patrol Station, because I simply do not know what's next.  I'll definitely be here through the beginning of April, when I'll have a show to hang at January's gallery in Truth or Consequences, NM.  But after that?  Steve and I are undecided.  Maybe a work camping job somewhere, maybe wandering the New Mexico state parks for the summer, maybe a knee replacement.
Posted by Unknown at 10:26 AM 2 comments: