Long Beach Peninsula and a Month of Camping Near Seattle 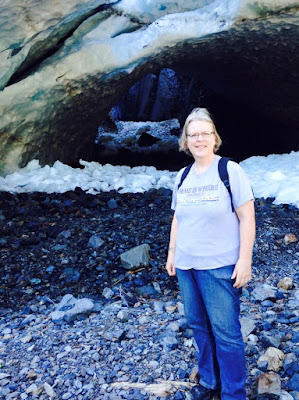 Me, in front of the Big Four Ice Caves in the Mt. Baker-Snoqualmie National Forest

When I last wrote (over five weeks ago!), I had been on the northern Oregon Coast and was about to head into Astoria to get the RV's oil changed.

The oil change guy discovered I needed new U-joints, so I went to an AA meeting and, by the time I left, I had a phone number of a full-service mechanic who was expecting me and was willing to fit me in immediately.  I got the U-joints, plus new windshield wipers and a check on my tire pressure, and then headed back to Fort Stevens State Park for another night.

The next day, I headed up to the Long Beach Peninsula.  I utilized my campground memberships and stayed at a couple of resorts that were on my RPI or Coast to Coast memberships.  I stayed one night at Eagle's Nest Resort in Ilwaco, Washington, where I saw deer wandering around in the campground, and another night at Pacific Holiday RV Resort in Long Beach, which was set back just a tiny bit from the beach.  Beautiful.  With my various campground memberships, I paid about about $14 per night. 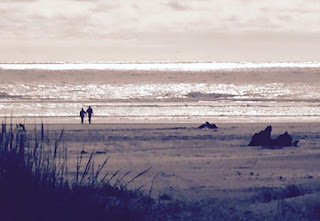 I decided to wait on going to Olympic National Park until I got some more work done on my RV in Seattle.  I'd been checking on Yelp for the best RV mechanics all the way up the West Coast and found one in Everett, just north of Seattle, who was reputed to be excellent.  I have had several problems come up during my travels.

One problem was a leak in a pipe that leads into my hot water heater.  I don't use my hot water heater very often.  Really, for one person who normally showers at the campground shower rooms, it's hardly necessary--I can heat up a little water to wash my face or my dishes.  However, when I use water (either from being hooked up to water or from my freshwater tank), it goes to the hot water tank, anyway.  So the water leak was a problem even when I wasn't using hot water.  There's been enough damage from this little leak that I'll need to get my linoleum floor replaced once I get home.  And, until I got the leak fixed, I had to carry about a half-dozen gallon jugs of water with me for all uses, not just drinking, but also flushing and dish washing and so on.  I knew life would become simpler once I could use my plumbing again.

I'd also had some occasional trouble lighting my propane fridge, and I needed a new solar regulator panel, and my oven pilot would light, but the oven wouldn't heat up.  And I had been planning ever since I bought Solveig (the name of my Toyota Dolphin, Norwegian for "house of the sun") to add a roof-top air conditioner.

So, after exploring some of the Long Beach Peninsula in the southwest corner of the State of Washington, I headed to the Seattle area to see about getting these repairs and upgrades taken care of.  I loved the drive from the Peninsula to I-5, where I found an art trail at the Willapa Bay National Wildlife Refuge.  I stayed overnight at a Love's Truckstop south of Chehalis, where I was able to use wifi next-door at Starbucks to watch a little streaming Netflix. 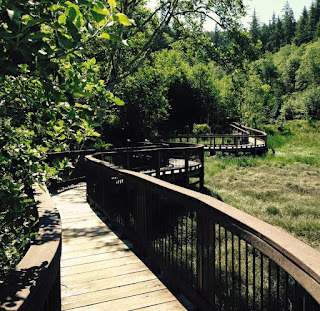 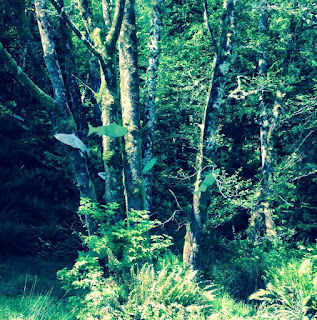 Salmon swimming in the trees

I arrived in Seattle on Saturday, June 6th, and called up my son and my best friend, both of whom were able to meet me that day at Golden Gardens Park in Seattle.  This was one of my old places to hang out years ago when I lived in Ballard, a Norwegian ghetto in Seattle which has now become an upscale neighborhood just like all of the other upscale neighborhoods.  The park remains the same, takk Odin.  We hung out and enjoyed a meal and sat in the sunshine. 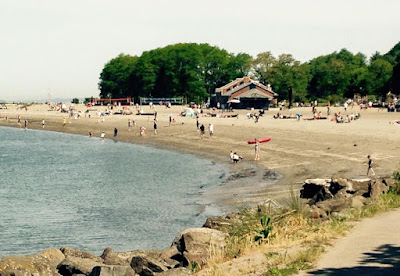 The beach at Golden Gardens Park in Ballard

Then I headed up to the Tulalip Resort Casino near Marysville, Washington, which I returned to several times during my visit to the Seattle area.  Tulalip is very RV-friendly, with one parking lot devoted specifically to RVs and another overflow lot available when the RV one is full.  I tried a couple of other casinos while I was in the Seattle area (Angel of the Winds in Arlington and Snoqualmie Casino near Snoqualmie Pass), and there is no comparison.  Tulalip is free and has fairly flat parking lots with lots of landscaping that makes it possible to get a sense of privacy.  It's also easy to get on I-5 from the casino to head into the city. 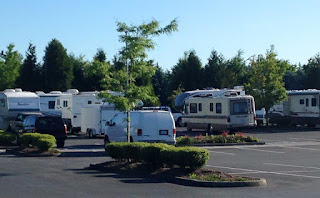 I called my new favorite RV shop, Ryan's RV Town in Everett, and got an appointment first for an estimate and later to have the work done.  Then I scheduled the rest of my Seattle activities around these visits to the shop.

It would take too many words to describe everything I did in Seattle, but the highlights were Steve's two-week visit and camping with my son Sly at a couple of nice Mt. Baker-Snoqualmie National Forest campgrounds.  I also got to see my dear friend Helen, my cousin Joanne, and several other close friends.  I would like to have seen everyone I know and like in the Seattle area, but my main purpose was to have lots of quality time with my son, and that was achieved.  I also got to celebrate Sly's 23rd birthday and my 60th birthday while in Washington. 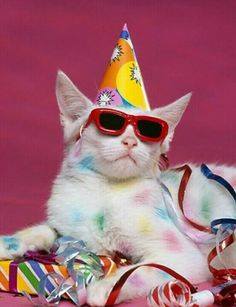 Birthdays are far out!

While Steve was visiting, we stayed at Tall Chief RV Resort near Fall City, Washington.  It's a nice old Thousand Trails preserve that feels like a state park (big woodsy sites) with amenities (swimming pool, laundromat, wifi, etc.).  Again, I used my campground memberships and the stay cost us $14 per night.  So inexpensive, in fact, that we decided to rent a car while Steve was visiting, so we could leave the rig and the cat back at the campground while venturing out to sightsee.  I also purchased a screened canopy while in the area, which was great for bug-free outdoor dining and relaxing. 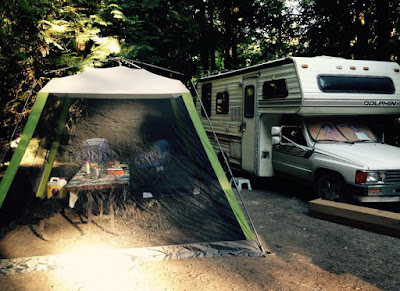 My new Coleman screened canopy--I can put it up by myself in just a minute or two!

We got an awesome deal on the rental car, and I have to recommend Flightcar to anybody who needs to rent a car at a major metropolitan airport.  It's a whole new concept in car rental.  The BMW we rented for two weeks was owned by a local guy who left his car at the airport while traveling.  Our cost was only $25 per day!  For a Beamer! 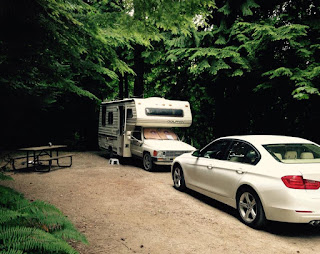 Our campsite at Tall Chief, with the rented BMW

During Steve's visit, we mostly relaxed and stayed at the campground, taking a few day trips here and there.  One particularly nice day was when we took the Edmonds-Kingston ferry and visited the Naval Undersea Museum in Keyport, over on the Kitsap Peninsula.  Steve loves submarines!  Later we stopped in nearby Poulsbo at the Poulsbohemian, which has the nicest view of any coffee shop I've ever visited, anywhere. 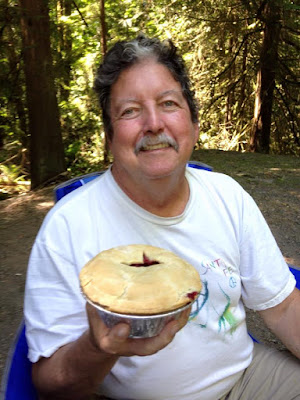 Steve, with a nice pie from Remlinger Farms

Before Steve's visit, Sly and I camped for a few nights up at Troublesome Creek, a Forest Service campground north of Index, Washington.  It was quite a long, bumpy road to get to the campground, and I didn't realize until we arrived that my bucket of gesso had overturned and spilled all over other art supplies and sketchbooks and so on.  By the time Sly and I got all the gesso cleaned up, there was also quite a bit on the cat, and weeks later she still has a few areas of gesso-clumped fur.  Troublesome Creek was gorgeous and worth the drive. 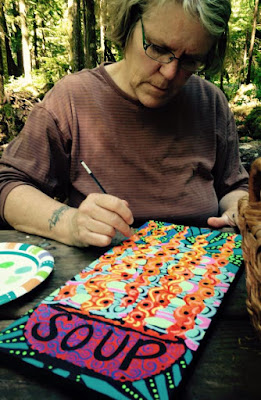 After Steve's visit, I headed up to Turlo, a Forest Service campground on the Mountain Loop Highway east of Granite Falls.  This campground on the Stillaguamish River also turned out to be beautiful.  There were some nice swimming holes right in front of the campground's beach.  Sly was able to join me for a couple of days there, and Helen came up for a nice Sunday visit. 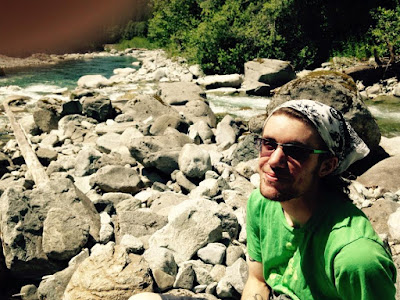 When Sly came up to see me at Turlo, we drove in his car about 15 miles further into the National Forest to hike to the Big Four Ice Caves.  These are the same caves which, just two days later, crashed in and killed one person and injured five others.  We were lucky to have been there before this happened.  The temps were in the 90s and the cave was dripping as if there was a rain storm inside.  I don't really understand while the Forest Service didn't close down this site before the accident happened. 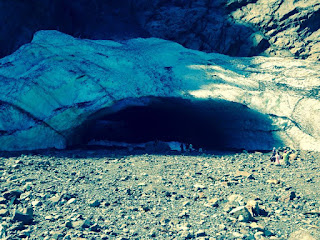 Big Four Ice Caves, two days before the cave-in that killed one and injured five

Sly and I also unexpectedly came across a 4th of July parade in the small community of Robe, Washington, which is just outside the National Forest.  We went there for a cold drink and stayed for the festivities. 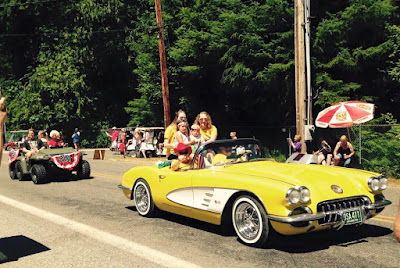 After this last camping trip with Sly, I went back into town and got all of my repairs done at Ryan's RV Town (except for the oven, which they recommended replacing, something I'm not ready to do at this time), and then it was time to go back on the road.  Much as I will miss those I leave behind, I was really relieved to be out of that big city traffic!

Now I have been on the Olympic Peninsula for a few nights, but so far trying to see much of Olympic National Park has been hampered by gray, rainy weather.  I've hesitated to drive up to Hurricane Ridge because I know I won't be able to see much in this weather.  So I'm hanging out in the Port Angeles area for another day or so to see if the weather clears up before moving on.  Currently I am using the wifi and drinking coffee at the very friendly Bella Rosa Coffee Shop and debating whether to drive back up into the National Park for a campground tonight or just to stay in town at Walmart or maybe find the Elwha River Casino?  I'm seeing it's 4:30 pm, so I guess I'm off to find a free parking lot here in town.  Ah, the life of the wanderer!