The Trip Home: Washington to New Mexico via the National Parks! 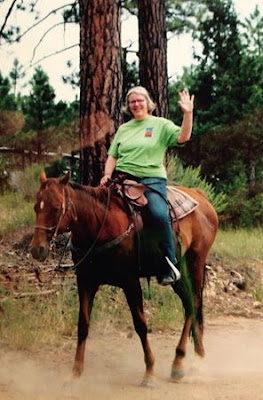 When I last wrote, I had left Seattle where I visited with my son and other family and friends for over a month.  I was ready to start heading back to the Southwest, but not before I went to Olympic National Park.  All of the years I lived in Seattle, I had only driven past the park to get to various vacation destinations.  But now, on my "2015 No Regrets Tour," I took the time to enjoy the Olympic Peninsula. 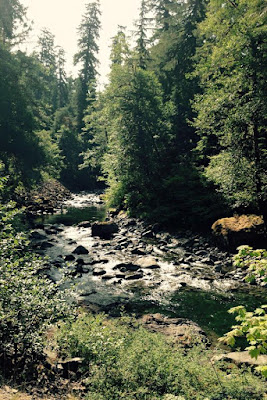 I spent several days at Olympic National Park, trying different campgrounds and seeing the Park's many-faceted features.  My favorite place was Sol Duc, where there is a privately-owned hot springs resort and RV park within the Park's boundaries.  I opted to stay down the road about a half-mile at the National Park's own campground, for a lot less money.  I lucked out and got a spot that was right near the walking trail over to the hot springs resort.  The day fee for using the hot springs was something like $13, very reasonable.  You get a wrist band and can come back several times during the day or evening if you wish. 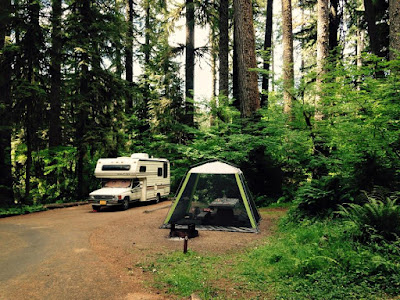 My campsite at Sol Duc

I had an encounter with a neighbor at Sol Duc that reminded me that I have a life back home that I was kind of missing.  I had accomplished the main purpose of my trip (spending about a month hanging out in Seattle where I would be available to my son and friends on their schedule).  So, I stopped moseying so much and began to make tracks for New Mexico.  Besides, there was a heat wave in the Pacific Northwest, so I figured I might as well head home a little more quickly than I'd planned.  I still went to most of the places I wanted to, but I didn't linger as long or meander as much as I had on my way north. 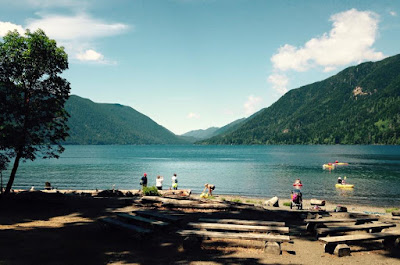 After Sol Duc, I stayed one really lovely night at the Fairholme Campground on Lake Crescent.  After that, I had hoped to stay at one of the beach campgrounds somewhere along the West Coast portion of Olympic National Park, but it was a very busy time and I had no reservations.  I couldn't get in at Quinault, either, and temperatures nearing 100 degrees were predicted, so I made a quick shot down I-5 to stay with friends in Eugene, Oregon, who have a 30-amp post in their driveway.  I was able to use my new roof-top air conditioner that I'd had installed in Washington, and it was great!  It literally scared the piss out of the cat the first time I turned it on, but she got used to it quickly. 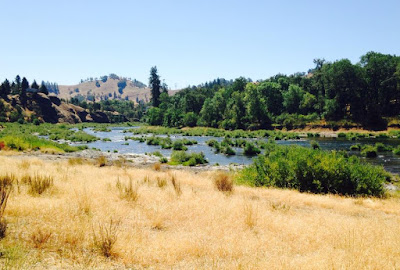 From Eugene, my next goal was to visit Crater Lake, another place I'd lived close to for many years but had never visited.  I took the North Umpqua Highway (Oregon Route 138) east from Roseburg and stayed at a lovely little Douglas County Park called Whistlers Bend.  There were also lots of Forest Service campgrounds all along that road--so many great choices and such a beautiful drive. I enjoyed a wonderful day at Crater Lake National Park, but I did not find a campsite there.  This was something I ran into a lot on my way home at the National Parks, even though they say on their websites that they have first-come, first-served camping.  But that turned out okay at Crater Lake.  I took the two-hour trolley tour ($24 for seniors) all the way around the lake.  A ranger gave us lots of great information on how this unique lake formed, what wildlife live in the area, etc.  It was a great way to see the Park, especially for a solo traveler.  After the tour, I headed south to Chiloquin, Oregon, where I stayed overnight (free!) at the Kla-Mo-Ya Casino. 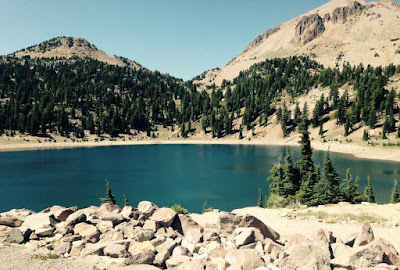 My next goal was to check out the Lava Beds National Monument and Lassen Volcanic National Park.  I hadn't realized it, but they are at the south end of what is called the Volcanic Legacy Scenic Byway, which starts near Crater Lake.  All along this route, I enjoyed beautiful views of Mount Shasta, and I was also reminded of playing the old computer game Oregon Trail which had a California trail option that went through this area. 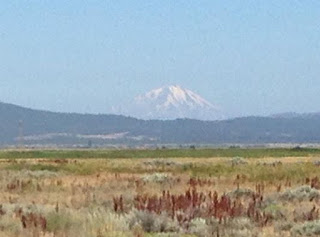 Mount Shasta was on my horizon for two days of driving

I visited Lava Beds one day, overnighted at Lower Rush Creek Campground in the Modoc National Forest, and went to Lassen the next day and afterwards stayed at Gurnsey Creek Campground in nearby Lassen National Forest.  I didn't linger at either of these parks because most of the visitor activity involves hiking.  I've learned on this trip that I do best at the bigger National Parks where they have bus rides, ranger talks, maybe a little nature trail, a nice lodge with rocking chairs on the deck, etc.

The next goal was to find a campground somewhere along the way to Lake Tahoe where I could stop and rest for a couple of days.  I wanted to cross all of Nevada via U.S. Highway 50, "America's Loneliest Highway," in just a couple of days, but needed to be ready for that push.  I made a wonderful unexpected find, Martis Creek Lake Corps of Engineers Campground near Truckee, California.  It was not as lush as the beautiful Pacific Northwest campgrounds I'd become accustomed to, but it was pleasant enough.  Being near the Truckee Airport, there were lots of fun experimental aircraft to watch, and I sat outside and did a little painting. 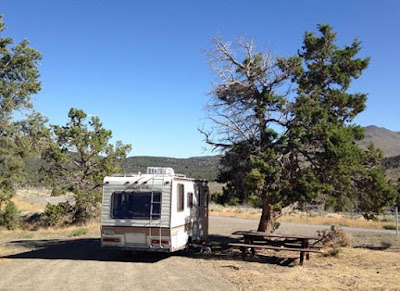 My nice little boondocking spot along the Loneliest Highway

I did manage to make it across most of Nevada in two days, boondocking one night about halfway across the state at an unmarked picnic spot in the Humboldt-Toiyaba National Forest, east of Austin, Nevada.  Just a pull-off with a picnic table under a tree.  It was a great place to rest, and I was on the road again early the next day.

Before leaving Nevada, I spent a day at Great Basin National Park and camped there at Lower Lehman Creek Campground.  The main activities at Great Basin are taking hikes or driving up to about 10,000 feet to look at bristlecone pines. 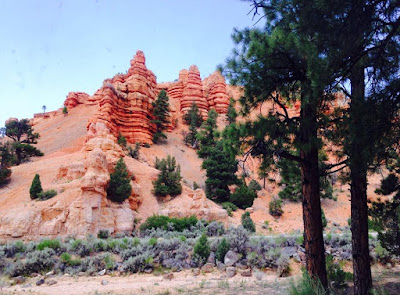 The view from my lovely Red Canyon campsite

My next destination was Bryce Canyon National Park, but I was so floored by the sight of Red Canyon, outside Bryce in the Dixie National Forest, that I had to stop for two days.  I camped at Red Canyon Campground and had a large campsite and a fabulous view of my very own hoodoos.  It was at Red Canyon that I noticed that the hip bursitis that had begun to plague me in Oregon and Washington was gone!  I was able to do a bit more hiking than I had for a while. 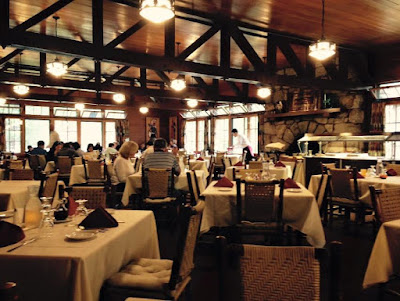 After not getting campsites at several National Parks, I decided I would visualize a wonderful visit to Bryce Canyon, with a good campsite, a bus tour, and a trail ride.  It worked!  Everything went exactly as I'd hoped.  I happened to arrive at Bryce Canyon on a weekend when they were having a geology fest, so there was an excellent tour led by a university geology prof.  I stayed two nights at Sunset Campground and was pleased to find out that, after having two knee replacements, I could still go on a horseback ride.  It had been a bucket list item for me to find out.  Another bucket list item was to eat a meal at one of the National Park lodges, so I did that at Bryce, where I enjoyed elk chili.

Leaving Bryce Canyon, it was tempting to head further up Scenic Byway 12 (Utah State Route 12) to Grand Staircase-Escalante National Monument and Capital Reef National Park, especially after several other Bryce visitors told me that Capital Reef was their favorite National Park.  But I can see that there is another trip up that way for me sometime.  The entire Colorado Plateau is beautiful, and I'll head up that way another summer.

Instead, I headed south to Zion National Park.  The scenery was gorgeous as I drove from the east entrance to the south exit, but again I did not linger.  There were no campsites available, and I was having a day when my inner introvert was unable to deal with the high energy of Zion's crowds.  So I drove on through and headed all the way to the Kaibab National Forest in Arizona, where I stayed at DeMotte Campground.  It was a friendly place--the camp host drove out to my site as soon as I arrived to get me registered and sell me some campfire wood, which was very handy!  However, a neighbor started his generator at 4:58 a.m. the next morning, so I got up and left early.  Thanks, Generator Guy! 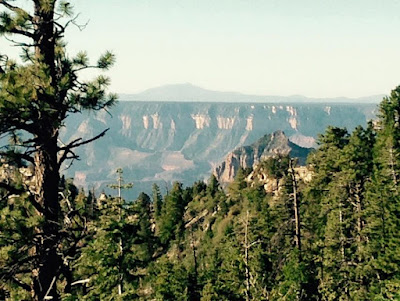 My first glimpse of the Grand Canyon, from the North Rim

It was good to get an early start.  I covered a lot of miles.  I headed to the North Rim of the Grand Canyon.  Again, I was unable to find a campsite, but I had a nice breakfast at the Grand Canyon Lodge, took several walks and looked at various viewpoints, and then headed on.  I ended up spending the night (free!) at McHood County Park on Clear Creek Reservoir, a few miles outside of Winslow, Arizona.  This nice little lake had lots of people fishing, swimming and boating during the day.  It was nearly 100 degrees during the afternoon, but the evening brought cool breezes off the lake and was very pleasant.

The next morning (two days ago), I left Winslow, not knowing if I would make it all the way to Truth or Consequences in one day, thinking perhaps I'd stop at Datil.  But it was my boyfriend Steve's birthday, so I was motivated to drive the 325 miles or so home.  I got here in time for supper, and Steve and I went out for pizza.

So, my trip back to the Southwest took me only a month (July 8th through August 5th), while the trip north had taken me nearly three months.  I guess I was ready to get back to my routine (whatever that is!  I've been on the road so long, I can't really remember...).

Today I had a meeting with the other local artists who show at Grapes Gallery and we discussed some upcoming themed art shows, so now I have some new work ahead of me.  I have several creative goals for the next few months, and then I'll head to Why, Arizona, where I'll stay for the winter and probably use as a base for some more travels.