Rubber Tramp Rendezvous Retrospective, as Told By an RTArt Camper 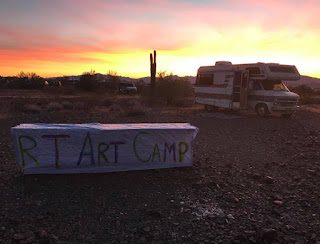 Getting there was the hardest part.  There was all the wrapping up of business and life in general in Truth or Consequences, and then the multiple instances of overheating (usually the RV, not me) in Palm Springs, which, in my reckoning, is always on the way to Quartzsite.

My December 26th sale was good--many large and small things left the gallery, and that was the goal.  Although I was leaving town soon and still had all of the remaining Christmas tchotchkes to put in storage, somehow it made sense to go pick up a couple of truckloads of furniture, musical instruments, and really interesting collectibles from a friend.  So Sun Gallery was packed when I left town, to go buy more brilliant stuff in Palm Springs, which has some of the West's best thrift shops.

Brownie had overheated a time or two during our return trip from the Midwest this past summer, but it made sense.  She's an old girl, and we'd pushed her hard.  On this westbound I-10 trip towards California, the temperature gauge began rising a little occasionally, but all I had to do was slow down a bit and it was back to normal.

It wasn't until I was actually in the Coachella Valley, shopping the fabulous thrift stores for California pottery and other Midcentury Mod goodies, that the real overheating began. 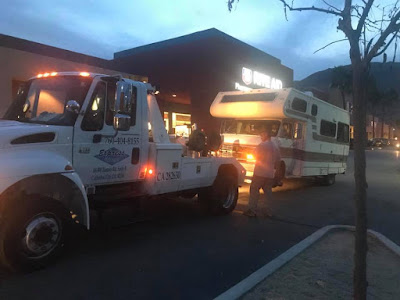 The first time, I was close to an auto supply store, so I let the engine cool, bought some coolant, and then topped it off myself.  That "fix" only lasted until my next thrift store stop, after which I had to get Brownie towed to a Palm Desert gas station on a Sunday night, with no assurance that the mechanic would help me the next morning.  I stealth camped illegally in the parking lot, which was kind of exciting--not something I can usually achieve in a vehicle which is so obviously a lived-in RV.

The mechanic arrived on Monday morning and said he doesn't work on vehicles like mine because they won't fit in his garage.  But then he got intrigued by the problem, and he did what turned out to be only a temporary fix.  It got me back on the road, though, and I didn't break down again until I got to Ehrenberg, AZ, on my way back towards Quartzsite for the RTR.  I was chasing rainbows along eastbound I-10--really an incredible afternoon, until the breakdown. 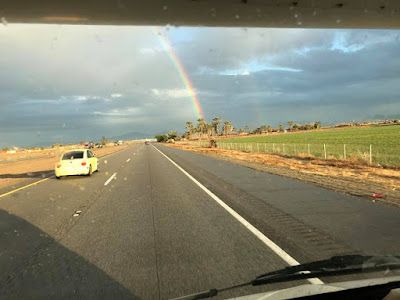 At one point I actually saw two full rainbows, but that was when the engine was overheating, so no pics ☹

As luck would have it, when I saw that the engine was overheating and pulled off, I was in a little unused RV park across the street from a laundromat/convenience store.  They let me dry camp overnight where Brownie died for $3, and they recommended an excellent mechanic.  The next morning, I was able to limp Brownie about eight miles to the mechanic, back in Blythe, CA, after filling the radiator with water, as all of the coolant was gone again.  The solution to my problems was a new fan clutch.  Brownie has been running really well ever since.

When there were no classes in session, RTArt Camp had Open Studio time each day, with lots of fun donated materials.  I made fun postcards.

So, that brings me up to the Rubber Tramp Rendezvous, and, of more interest to me, the new RTArt Camp.  My friend Blaize and I had arranged to meet and set up camp a day before the RTR was scheduled to begin, but when she arrived several hours before me, there was no space for us anywhere near the main camp.  So, she chose a spot one road over from the main camp, near where the RTR Musicians were camping.  We were the quiet buffer of introverted artists that protected the main camp from the music, except for that one night when the karaoke got really out of hand.  ("OMG, take that microphone away from that guy!," we all screamed quietly to ourselves in our separate vans and RVs.) 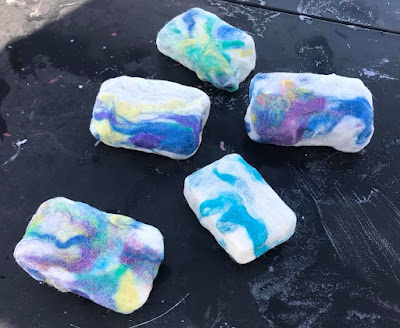 Felted soap, one of the things we learned to make at camp!

The walk from Art Camp to main camp was tough.  I needed to use my cane anytime I ventured out of my campsite and sometimes within my campsite, too. But I made the walk over there and back almost every day, in order to make announcements about RTArt Camp's events at the morning meeting.  I figured the walking was good for me.  I found the best path, which was fairly flat and invaded several people's campsites, but I gave them cookies and they were nice to me.  (Having an oven at the RTR makes you a queen!)  I only fell once, and that was on flat ground right at the main camp morning meeting, where people had me back up on my feet in no time. 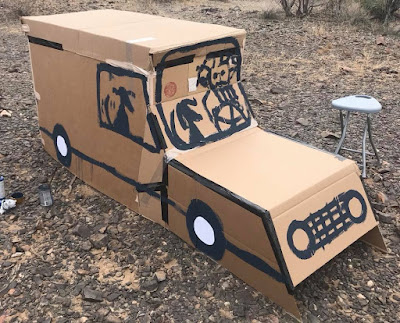 Burning Van--burned at the main camp's fire on the last night of the RTR.  In Tom Sawyer fashion, I tricked two men into constructing this for me, so all I had to do was conceive it and paint it.

Next year, we will work with the organizers (Bob's helpers, NOT BOB!) to get a site for RTArt Camp that is more convenient for everyone, especially the people who want to participate in some fun classes.  Also, so we at Art Camp can get to the events at the main camp. 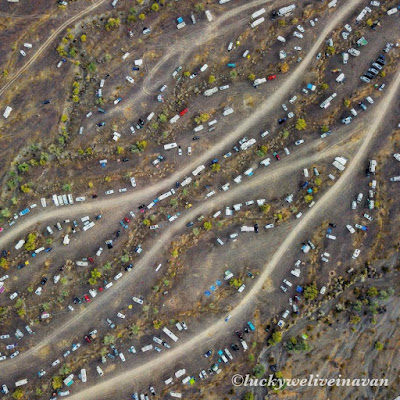 A drone photo of the roads going through the main RTR camp, published with permission of luckyweliveinavan

It was actually kind of nice to be remote from the main camp this year, because there were something like 3000-4000 people at this year's RTR.  It was incredible. There was even a New York Times article about the event that was published today, "The Real Burning Man" by Priscilla Green, NYT 1/31/18.  Check it out!  My name is in the article, with a link to my previous blog entry.

People were really jammed into the main camp area, but RTArt Camp, three washes away, was a nice quiet place to hang out and occasionally it became a real beehive of activity.  Our first event was to have a little Meet-and-Greet with anybody who wanted to teach an art class.  Out of that meeting came a full schedule of classes that filled up a few hours on each of the next eight days.  We had soap felting (who knew this was a thing?), poured acrylic painting, beading, crocheting, making Voodoo dolls (a Bob Wells joke!), collage, mandala drawing, realistic drawing, and even a finger painting class which grown men tried and enjoyed in spite of themselves.  We also constructed the Burning Van for the campfire on the last night of the RTR.  Too bad the reporters never showed up during the busy times! 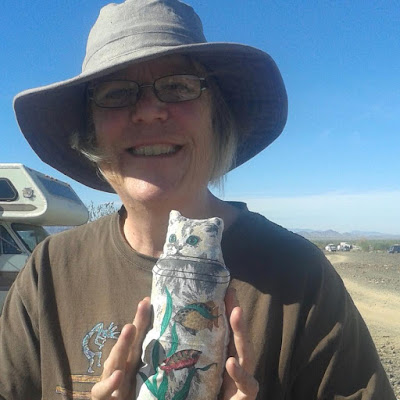 My Voodoo doll, which I have since stuffed with a little catnip for Miss Sonja to play with

For me, the best part of RTArt Camp was meeting the people who chose to camp with us.  We had no idea when we arrived whether anyone else would participate on a regular basis, but we got a nice cadre of interesting, fun people.  We began by doing artwork together, and then we began having campfires and shared meals and running errands in town together.  I met such awesome people and hope that our plans to stay connected work out. 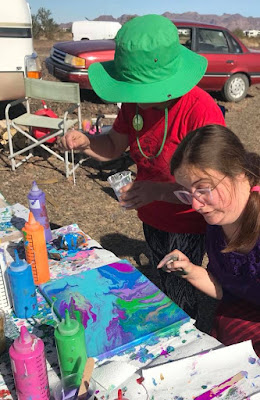 A wonderful thing that came out of this initial year of RTArt Camp, in my estimation, is that some of the solo travelers who hung out together decided to form an intentional community of nomadic artists.  The plan is to determine as a group where and when they will travel together, and, of course, some folks will peel off from the group sometimes for personal trips or jobs or whatever.  But there will be a core group, and I can go visit with them sometimes! 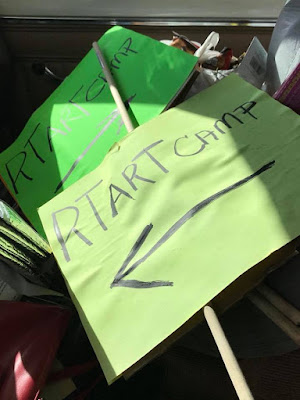 So long til next year, RTArt Camp!

This new intentional community is important to me also because I'm no longer going to be spending as much time in Why, AZ, as I have the past seven years, ever since I met Steve.  He has sold his RV to one of our friends and has an apartment in TorC now.  We can certainly go back and visit with our many friends in Why, but we'd be staying in my much smaller Brownie rather than the fifth-wheel (which Steve somehow never named, although "Brownie" would've worked for that one, too). 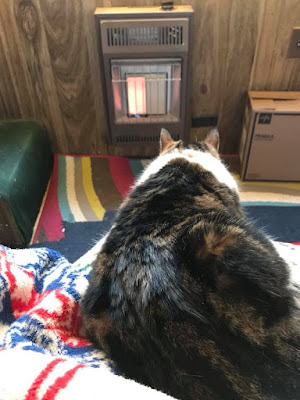 A chilly morning in Why

After Quartzsite, I went to Why for one last short stay in the fifth wheel with Steve, and then back to TorC, where I have been hooked up behind my gallery for several days.  I was kind of unexcited about returning here.  I wanted to go camp in a van down by the river with the other artists. 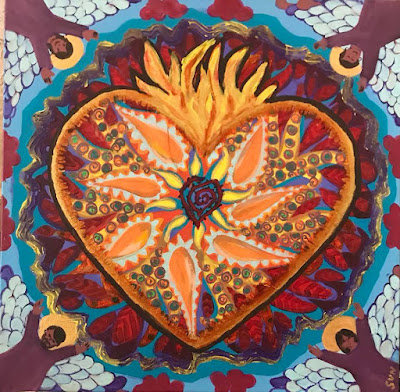 But life in Truth or Consequences is not boring, and I got back into the swing of things rather quickly.  There's a ring-tailed cat living in the ceiling of my gallery, and a whole series of events planned for him in the near future.  Steve is helping me get my Class A out of storage and onto my mechanic's nice big lot on the main highway through town, where it will get attention and get sold.  I've torn up the gallery so I can fit in those estate pieces that I took in just before I left for the RTR.  I delivered a painting to Passion Pie Cafe's annual Sacred Heart contest.  I paid my 2017 sales tax, and determined that I'll have to sell about 1000 items on eBay between now and April 15th in order to pay my Federal Income taxes.  However, I'm planning a trip to Florida instead.  That's what we people who are famous enough to be in the NYT do, I guess.  I'll let you know, once I meet the others.  Maybe they're in Florida, too. 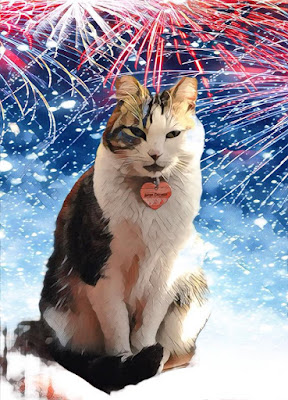 And Happy New Year from the cat.