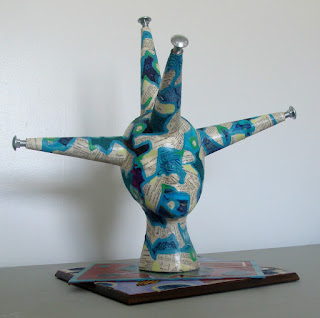 I have changed the name of my blog.

I started a "Soaring Sun Studio" blog in 2009, back when I still lived in Washington State and was first starting to have some success as a professional artist.  Later, my personal life was unsettled and I had difficulty doing artwork and writing about it in a blog.

In 2011, after getting a divorce, I hit the road in my motorhome.  As I was getting ready to leave, I started my second blog, "The eBay/RV Life."  Throughout my travels, I gathered readers and friends.

Now, well into 2012, I am back to being settled in one place, at least for a while, and I'm doing a lot of creative things.  It's time to focus on my artwork again, hence the name change for the blog. 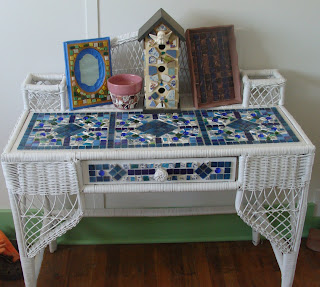 And a journey it is!  A few years ago, if you'd asked me to define myself as an artist, I would have said simply that I'm a mosaic artist.  Now my media and interests have broadened.  I still like to glue things to other things, but I've also been drawing nearly every day for many months, and I paint frequently, too.  Collage, papier-mache, and sculpture have all been calling me.  Seriously, calling me.  I have dreams about doing artwork and then I get up and do it.  Sometimes I don't wait until morning.

I still sell vintage designer scarves and funky Western wear on eBay, and I still use my RV to travel.  But now I also have an apartment and job in Truth or Consequences, New Mexico.

In fact, I am in the process of changing jobs.  I've worked at a lovely hot springs motel for the past two summers, but I've just been offered work by my friend January who is expanding her art and antiques gallery.  I'll have the freedom to do artwork and sell on eBay during the down times between customers.  Yay!

I also sell antiques, vintage clothing, and my own artwork at January's.  Recently I framed and hung 10 colored pencil pictures there, mostly mandalas. 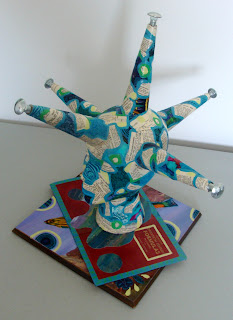 Here are some shots of a sculpture called "Better Living" that I recently completed.  It's in response to a Call for Artists that my friend James Gasowski made for his Gallery Niche.  There will be a show at Niche during the September Second Saturday Art Hop that is dedicated to National Literacy Month.  All of the works must be related to books in some way. 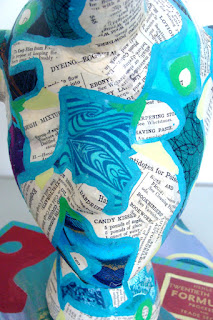 For my sculpture, I started with an interesting hardcover book called "Henley's Twentieth Century Formulas, Processes and Trade Secrets."  This book is packed with about 10,000 recipes for how to make everything from absinthe to zinc plates.  Whatever the problem...chemistry to the rescue!


The book is fascinating.  I had thought perhaps I could use it to make some "natural" products at home such as cosmetics or cleaning products, but I found myself rather appalled by the ingredients used in the early part of the 20th Century.  A cough syrup recipe calls for heroin, and other formulas call for chemicals I wouldn't put in or on my body.


The base of "Better Living" is recycled wood with paintings and fabric motifs related to natural earth elements and species...water, dirt, fish, birds, plants.  The book cover is flattened on top of these pictures, and the bust arises up out of the book.  Her face, head, and horn-like appendages are covered with formulas and swirly fabric designs, as if her head is spinning with too much information and is under even more pressure from the carriage bolts driven into the ends of the horns.  Poor gal!  Yet the bright colors, the unexpectedness of the horns and the sculpture's name indicate that it's not all that serious.

My next project is going to be a table top for Passion Pie Cafe, where they have local artists paint tables that are used and sold, creating a constant flow of new artwork nearly as tantalizing as the fabulous pastries made on site. 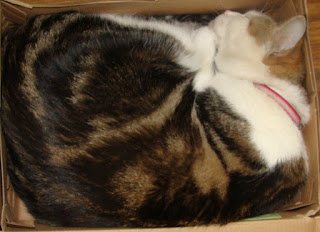 Many things change, but some stay the same.  Sonja loves boxes.