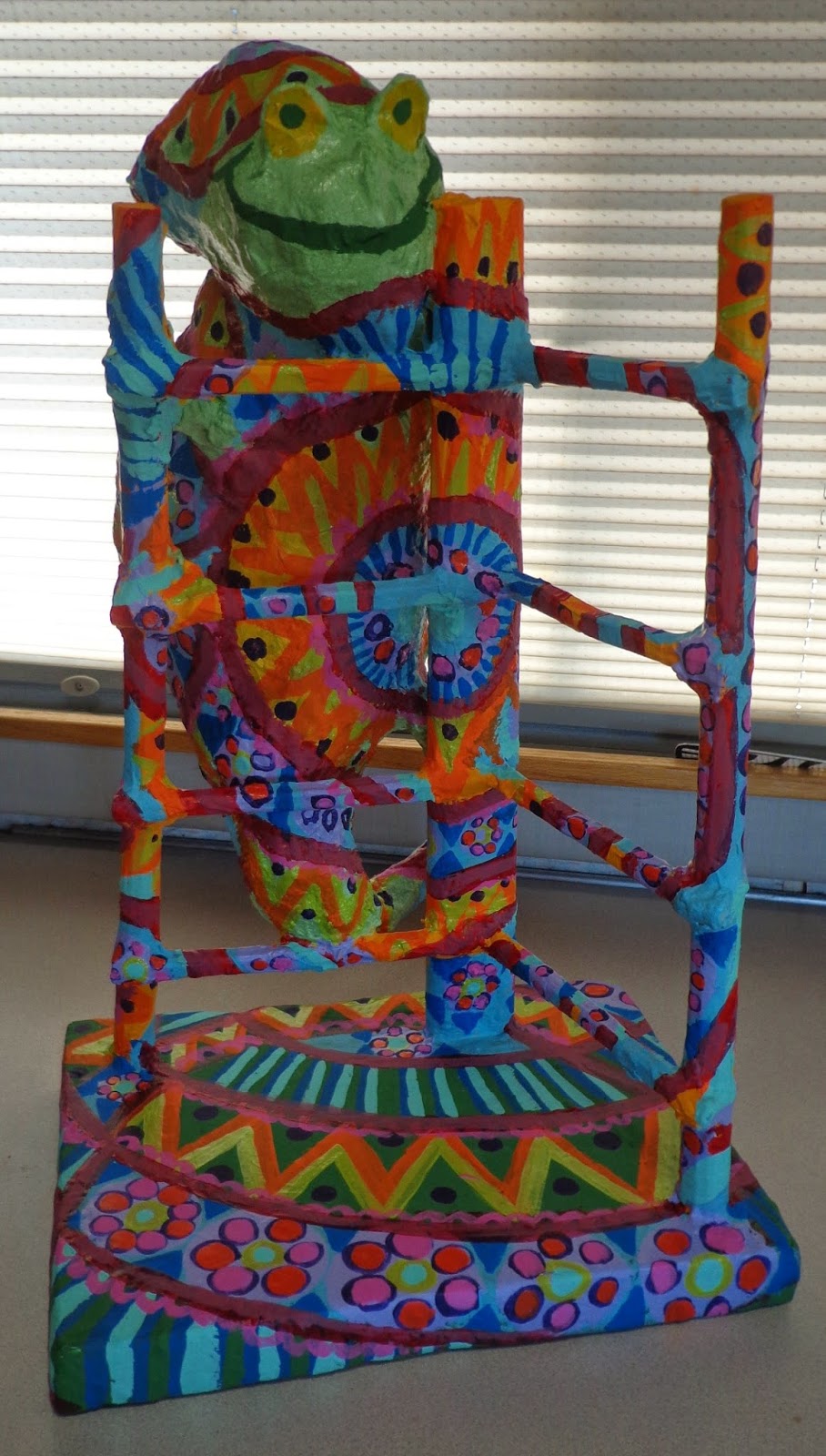 To me, papier-mâché is a fun, nostalgic craft medium as well as a challenge to master now that I'm a "professional" artist who sells some work now and again.  I'd like to be able to do it consistently well.  So I took on a fairly big papier-mâché project for practice and to participate in a ladder-themed show at Grapes Gallery in Truth or Consequences, New Mexico.

Initially I wasn't planning to make anything for this show, because I was busy with other work.  But then when I went to TorC last month to hang my solo show at January's Gallery, I got inspired by what the other half-dozen or so local artists had done with ladders of all sizes, shapes, colors, etc.  Fun stuff!  And I was assured that I could still add a piece, because they plan to keep the ladders installed for several more months.

So I took two small, unadorned wood ladders home from Grapes and got going.  Ya'll know how much I love to make mandalas, so my first thought was, how can I make beautiful mandalas on these nice little ladders?  Then, an idea hit me of a chameleon who is changing his skin to match a mandala.  Yikes.  Weird but fun. 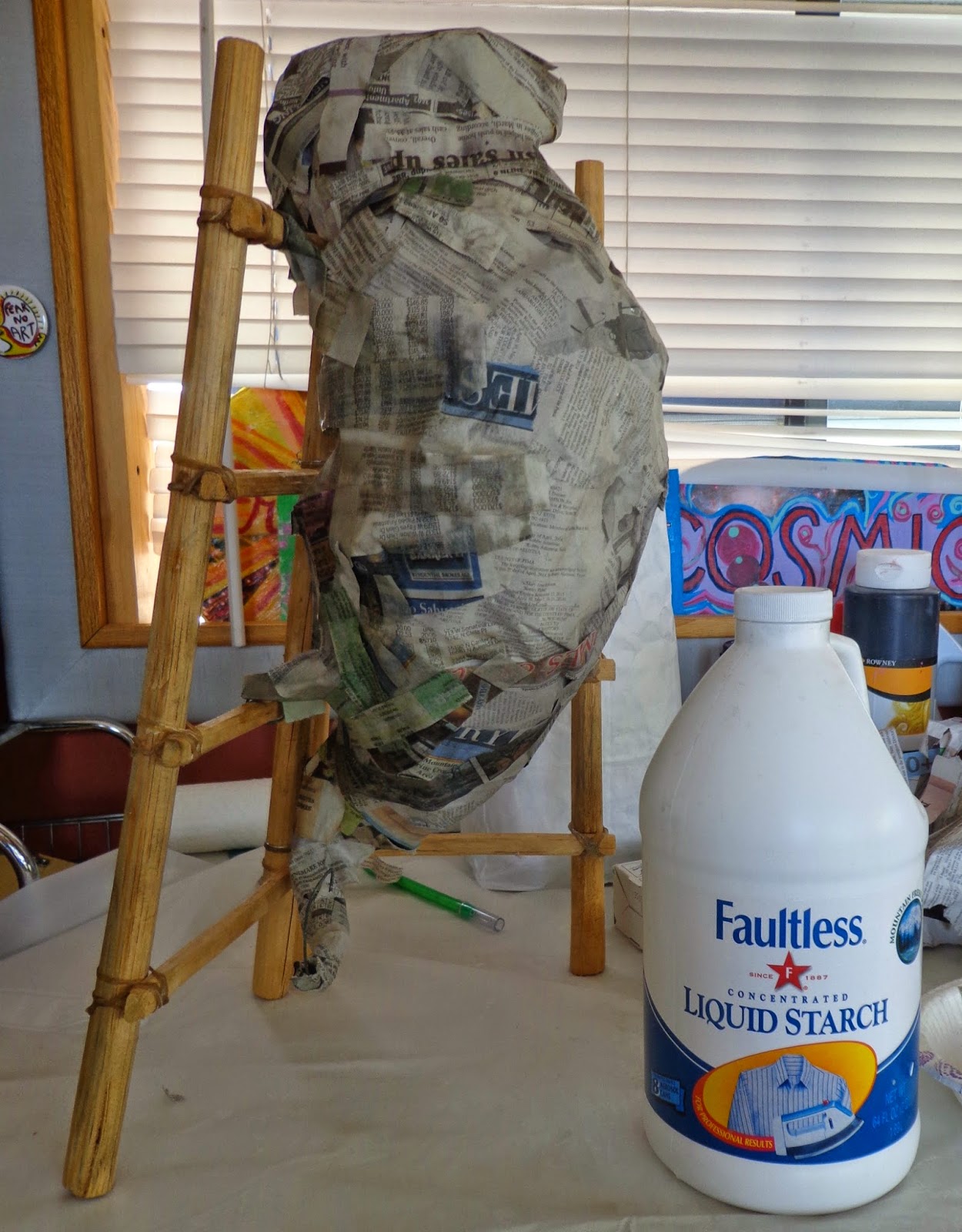 This is how it starts...

Because some of my FaceBook friends have asked about papier-mâché, this blog post is sort of a sculpture play-by-play.  (Hoping one of my not-to-distant future blog posts will be about travel...but I'm kind of stuck here for a while.)

When I got the chameleon idea, I figured I would have him climbing the ladders somehow, and that I'd make him out of papier-mâché, because I figured some sort of clay figure would be awfully heavy to mount, plus I don't have ready access to a kiln these days.  And papier-mâché is fun!  At least, that's the way I remember it being in the past.

I wired the two ladders together to make a sort of corner lattice, and I created the chameleon by making a rough figure (called an armature) that I could use as a base, using newspaper, wire, and masking tape.  I'd already cut up the entire Sunday paper from Tucson into 1-inch wide strips, and I started dipping these in liquid laundry starch and then draping them over the armature.  I could make a layer and then I needed to stop and let it dry completely (which doesn't take long in desert heat, let me tell you). 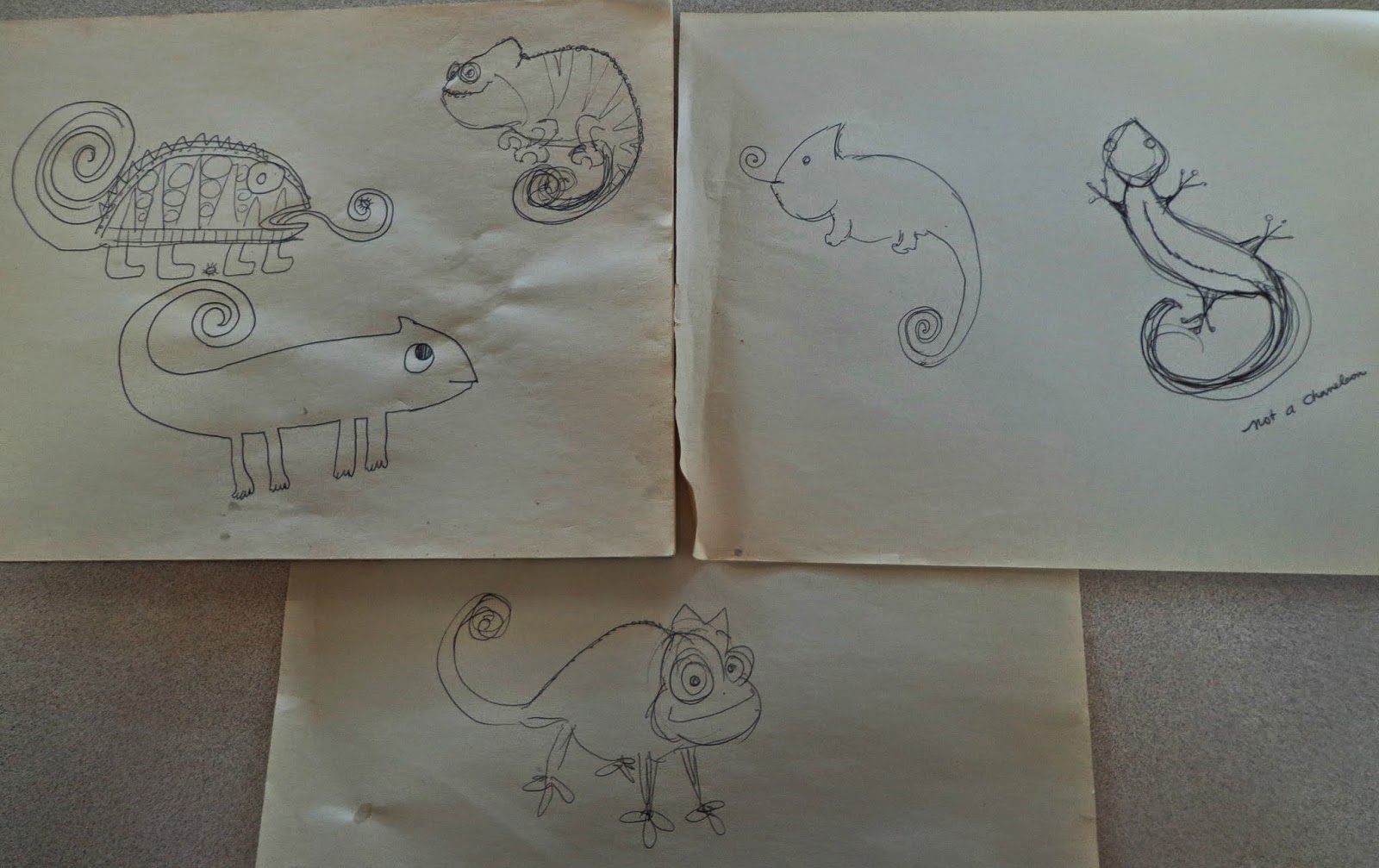 Some chameleon sketches and ideas

For days, the chameleon did not look anything like a lizard.  He looked almost entirely like a large gray rodent.  It was a bad case of reptile dysfunction. 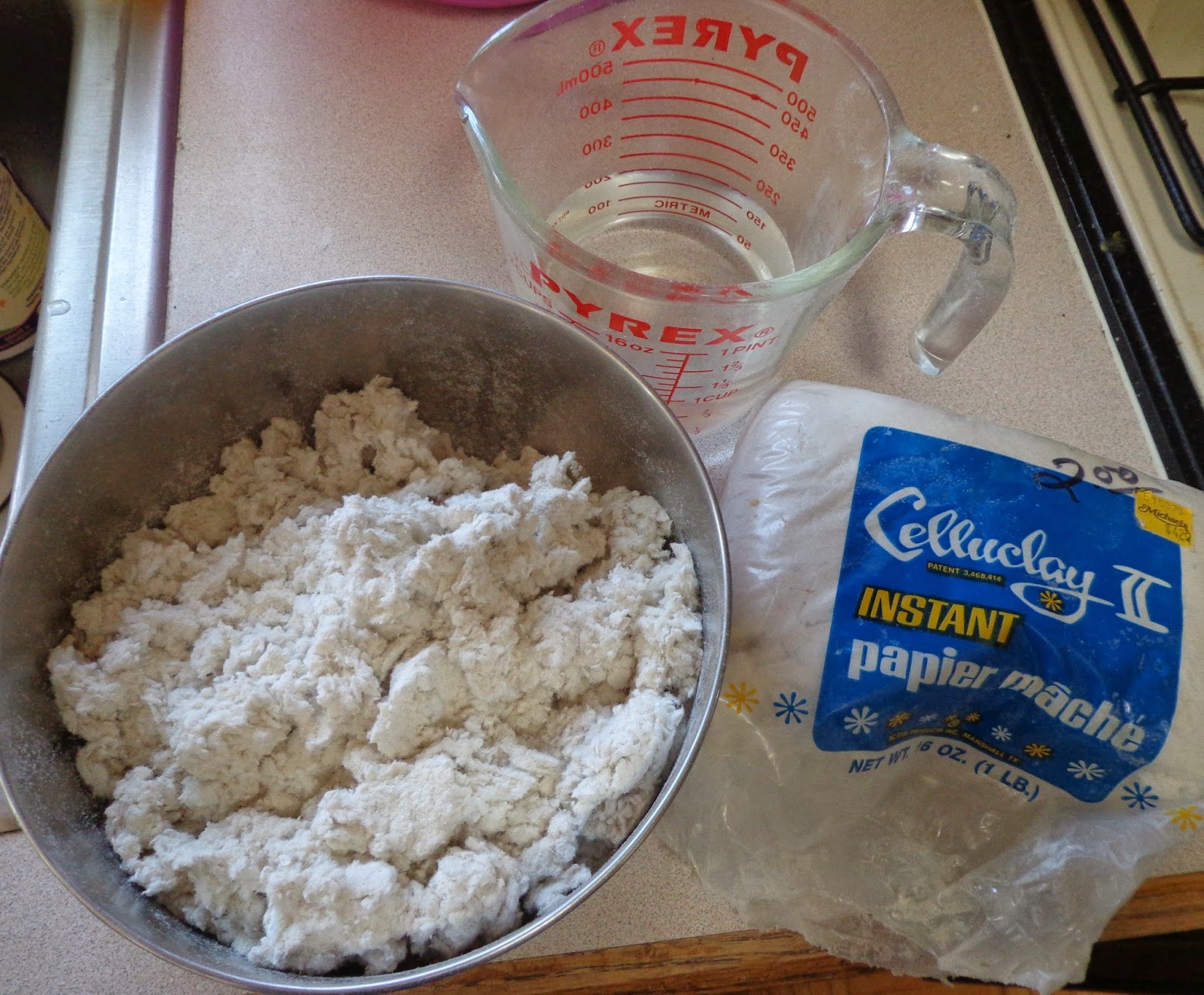 After a while, I decided to round out the chameleon's shape and features using another papier-mâché method.  I had a bag of paper pulp called Celluclay which I mixed with warm water to create a clay-like paper mush.  It was easier to sculpt and mold than the newspaper strips, but it also was kind of granular and hard to smooth out.  When I use paper pulp again, I'll want to have a Dremel or small sander handy to smooth the surface before painting. 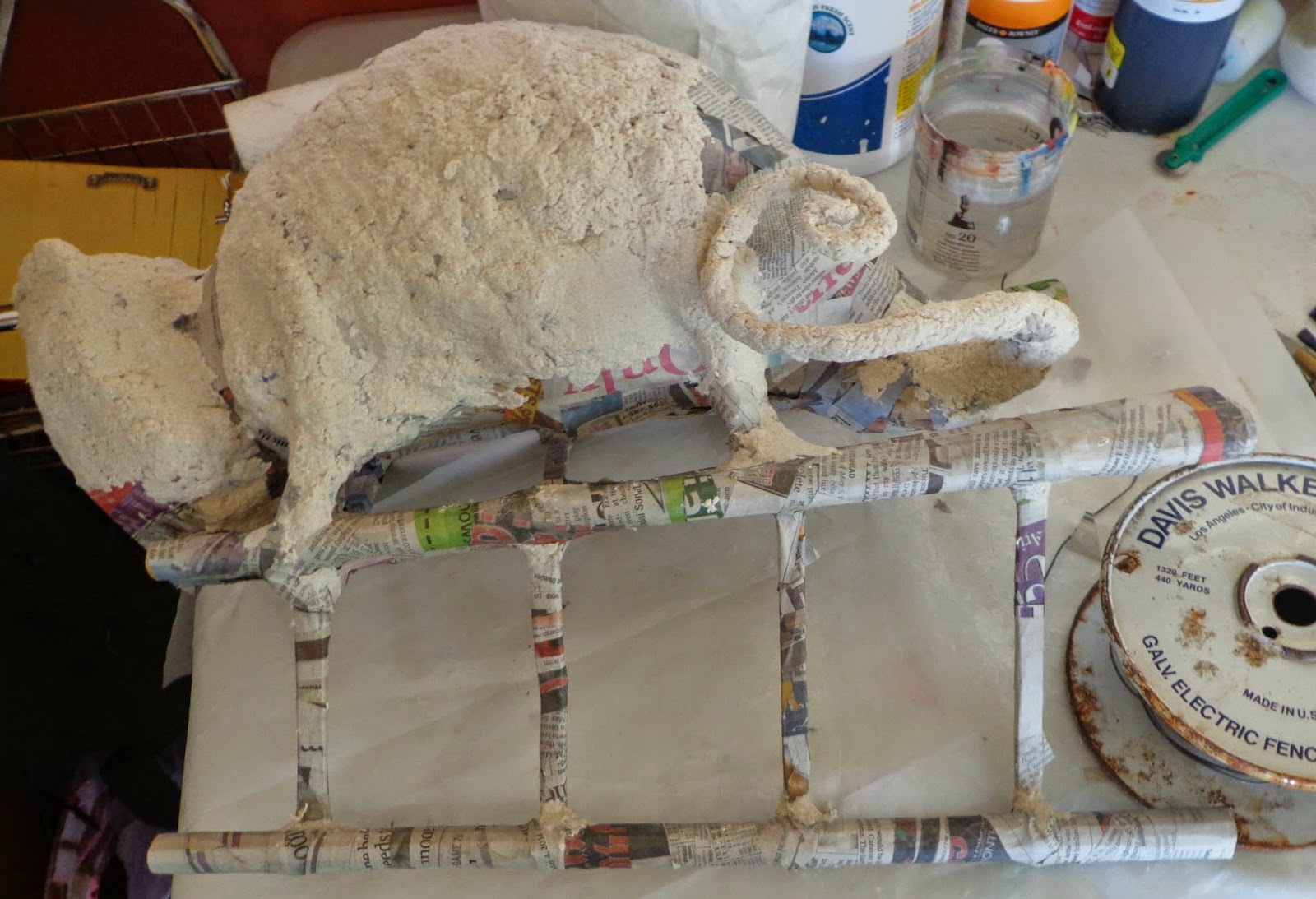 Here you can see the Celluclay being used to round out the figure's shape.  Also note the roll of galvanized electric fence wire to the right, which I used for making this sculpture.  Those of my readers who have followed me since I became a full-time RVer in 2011 may remember when this same roll of wire saved my bacon after the back bumper of my Toyote Dolphin fell off on I-10, somewhere just this side of Biloxi.  This wire was one of my all-time best garage sale purchases.

This time, I didn't have that sort of tool, so I just sanded like heck with wet black XX fine sandpaper and gessoed, and sanded and gessoed, and so on.  It was still pretty bumpy when I started painting it.  It was not going to get any smoother on my watch.

That's the beauty of being an Outsider primitive naive crafter or whatever the heck anybody wants to call me.  It's finished when it feels like it to me. 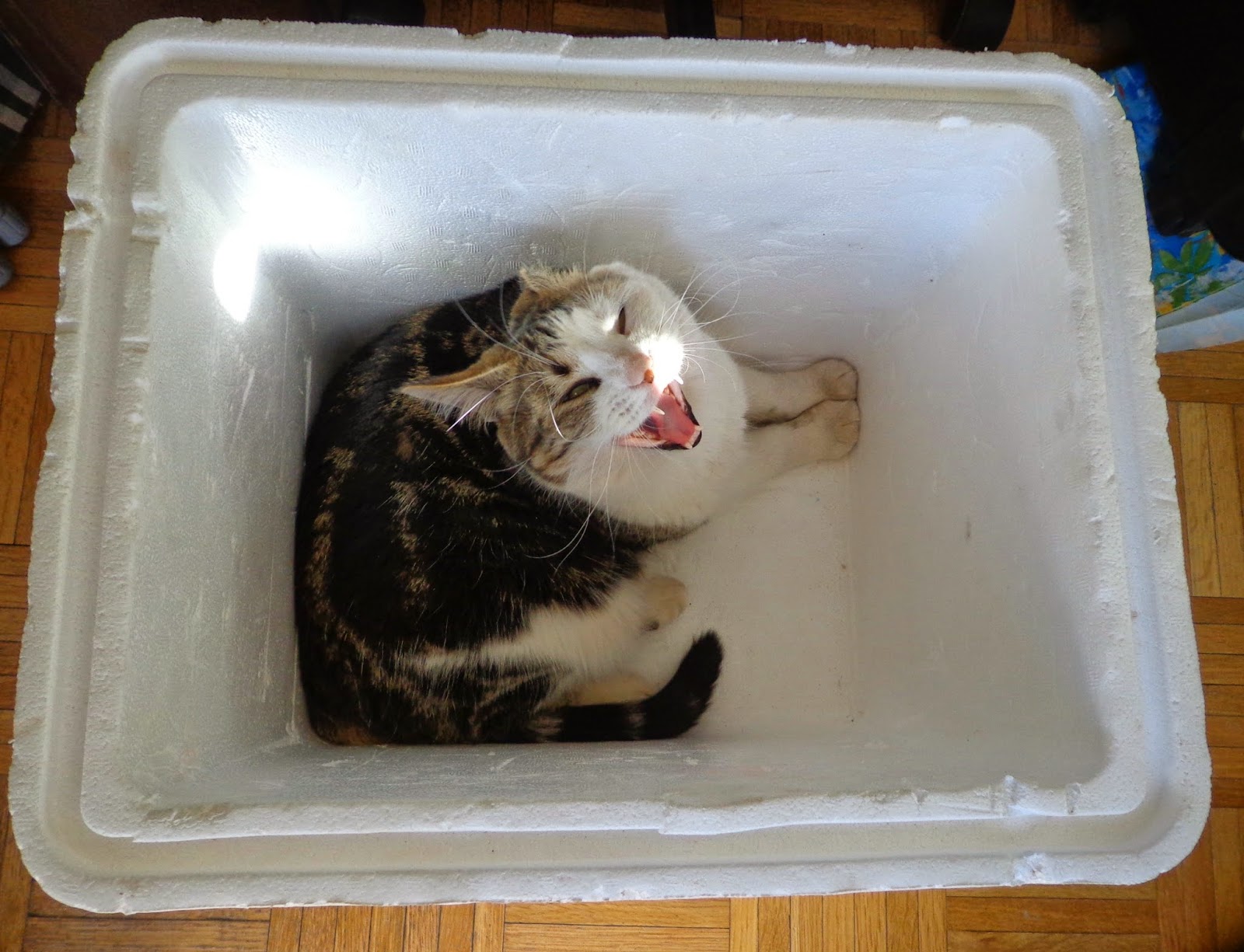 While working with the Celluclay, I ran into another problem, besides overall ugliness of the project so far.  I'd envisioned the lizard crawling up the lattice one way, but that way was making the whole thing unbalanced.  So I had to cut the chameleon off the ladder and rewire him to the other side.  Consequently the sculpture turned out to be less compact than I'd figured, and it also needed a base, which I made from a piece of a styrofoam cooler, once Sonja was done using it. 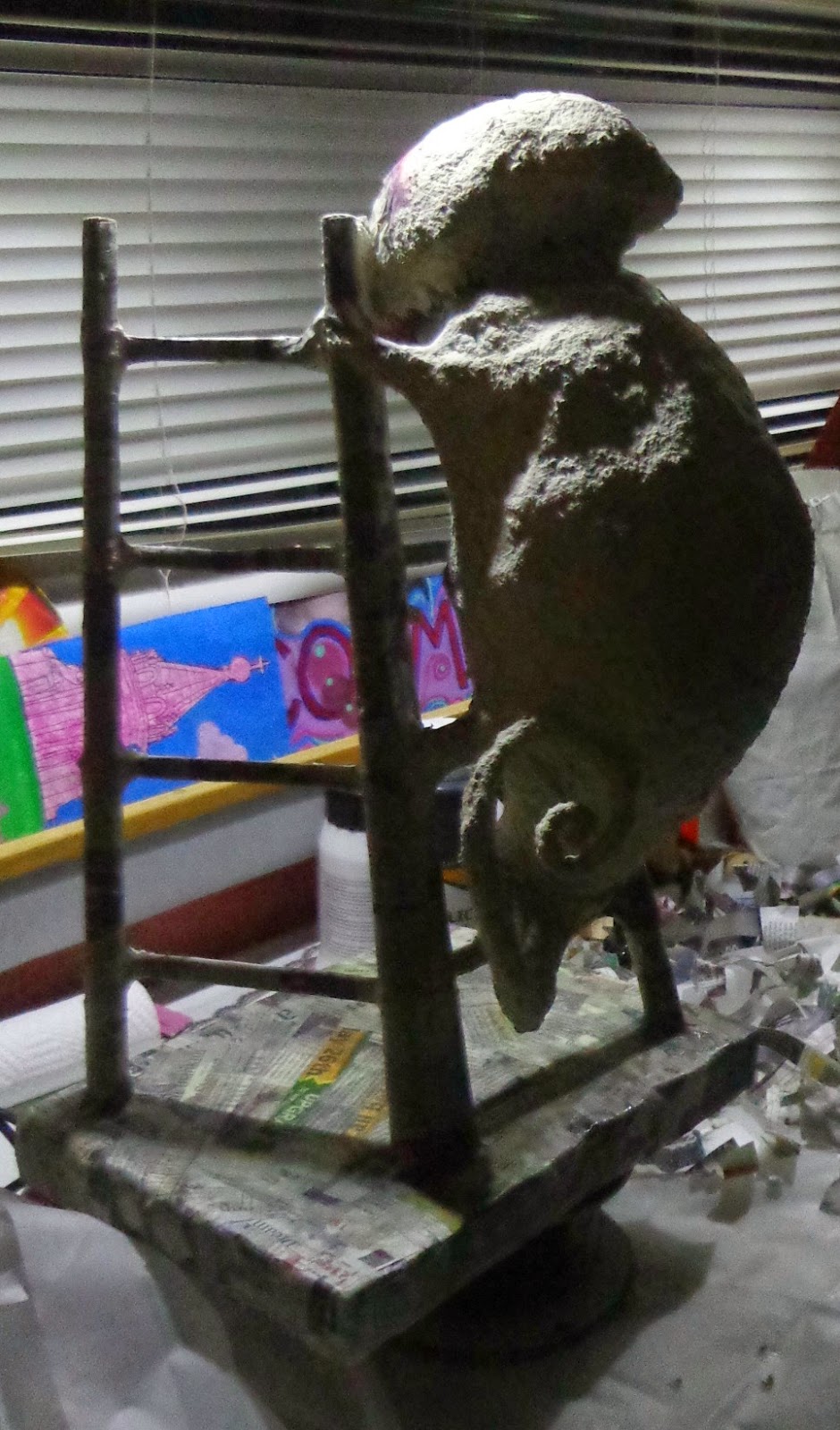 I listened when my friend Lise said, "It's all in the tail."

Next up was some base coat paint, a pistachio mint green followed by extreme glitter green for the chameleon, saffron yellow for the ladders, and pine green for the base. 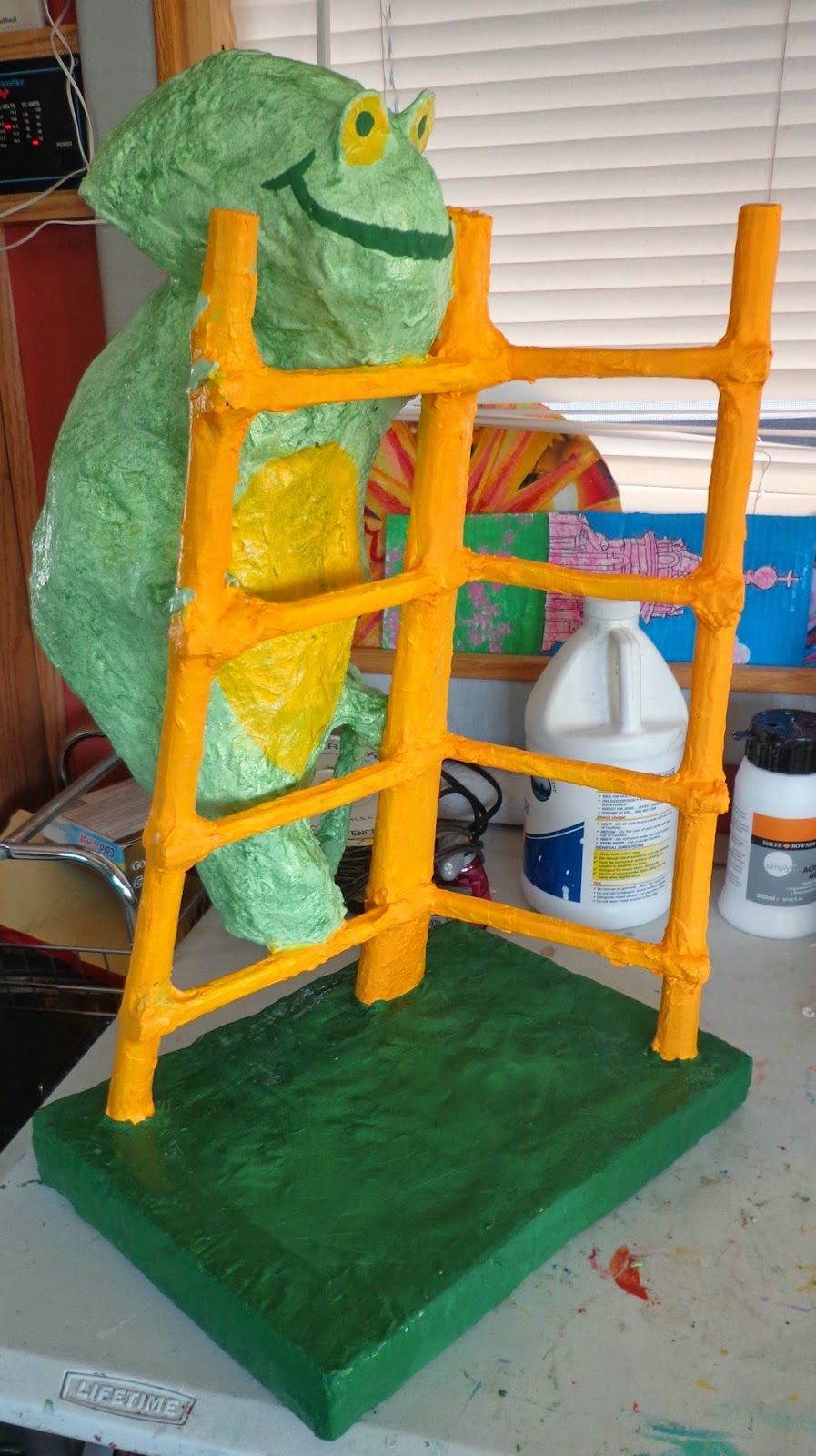 Then the really fun part began.  I found that the sculpture had three main planes and I used these as the bases of where to put the mandalas.  I used the same colors and patterns in all of the mandalas, so that the whole sculpture--both chameleon figure and the ladder and base that he was supposedly trying to match--all had a uniform look.  A mixed-up, patchwork, crazy but uniform look. 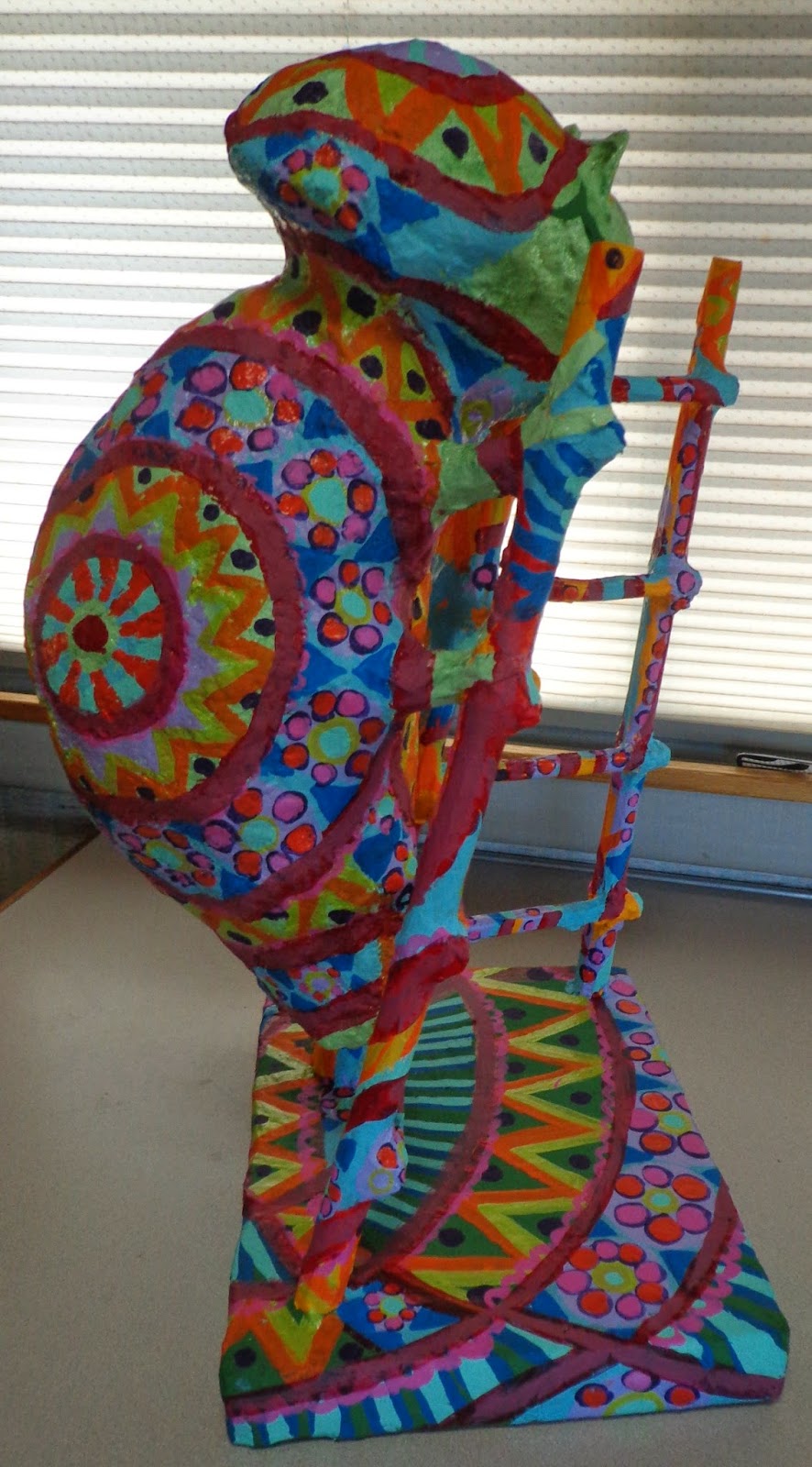 It was very fun to do this piece, and I'm glad to say that it did finally turn out much as I had hoped when I first saw it in my mind's eye.  There were numerous times I was ready to chuck it in the dumpster, but then I would remember that there was a lot to be learned from this project, even if it turned out yuckier than lizard poop. 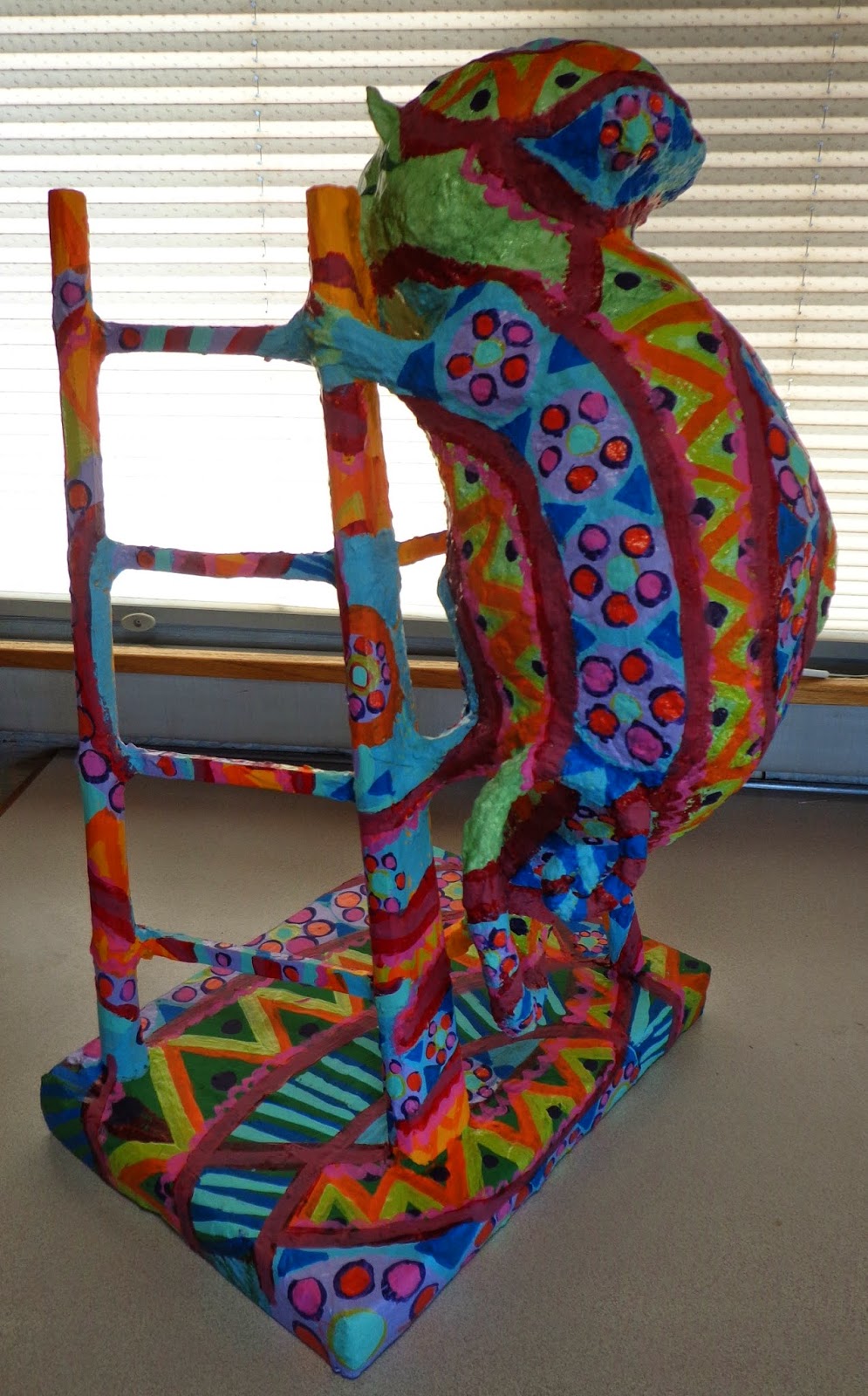 On another topic, which I brought up in my last blog post, I did get on the Arizona state insurance plan, and I am very happy about this.  I still need to stay put for a few weeks or maybe a month while paperwork gets handled, but I'll be seeing a new primary care doctor soon and hopefully getting referred to an orthopedic for knee care. 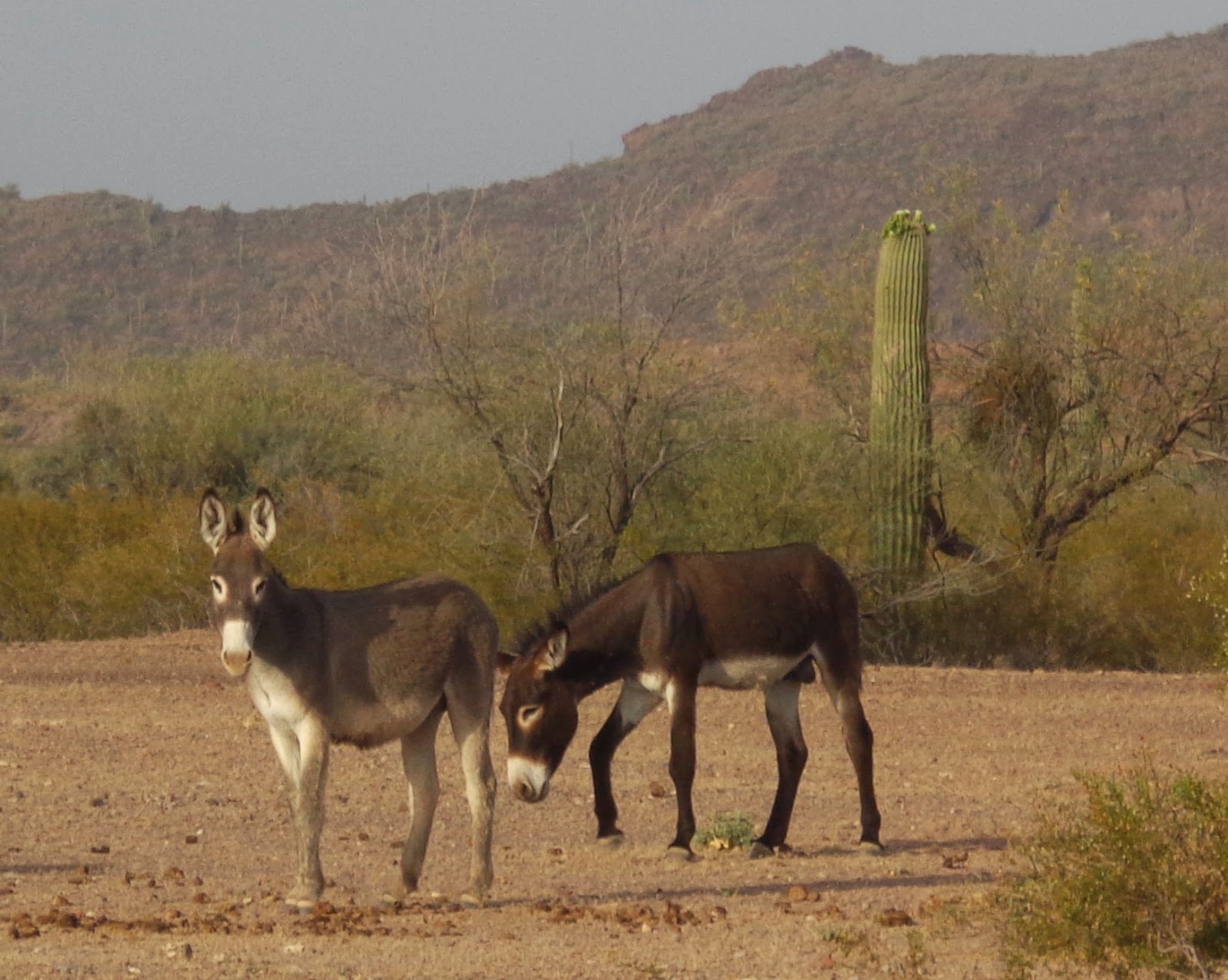 I'm still enjoying staying at Hickiwan Trails RV Park, and it's a good thing we're hooked up to electricity, because we're having some 100-plus degree days right now.  The early mornings and late evenings are very pleasant and cool, though, and I spend them outside as much as possible.  We get some fun neighbors sometimes. 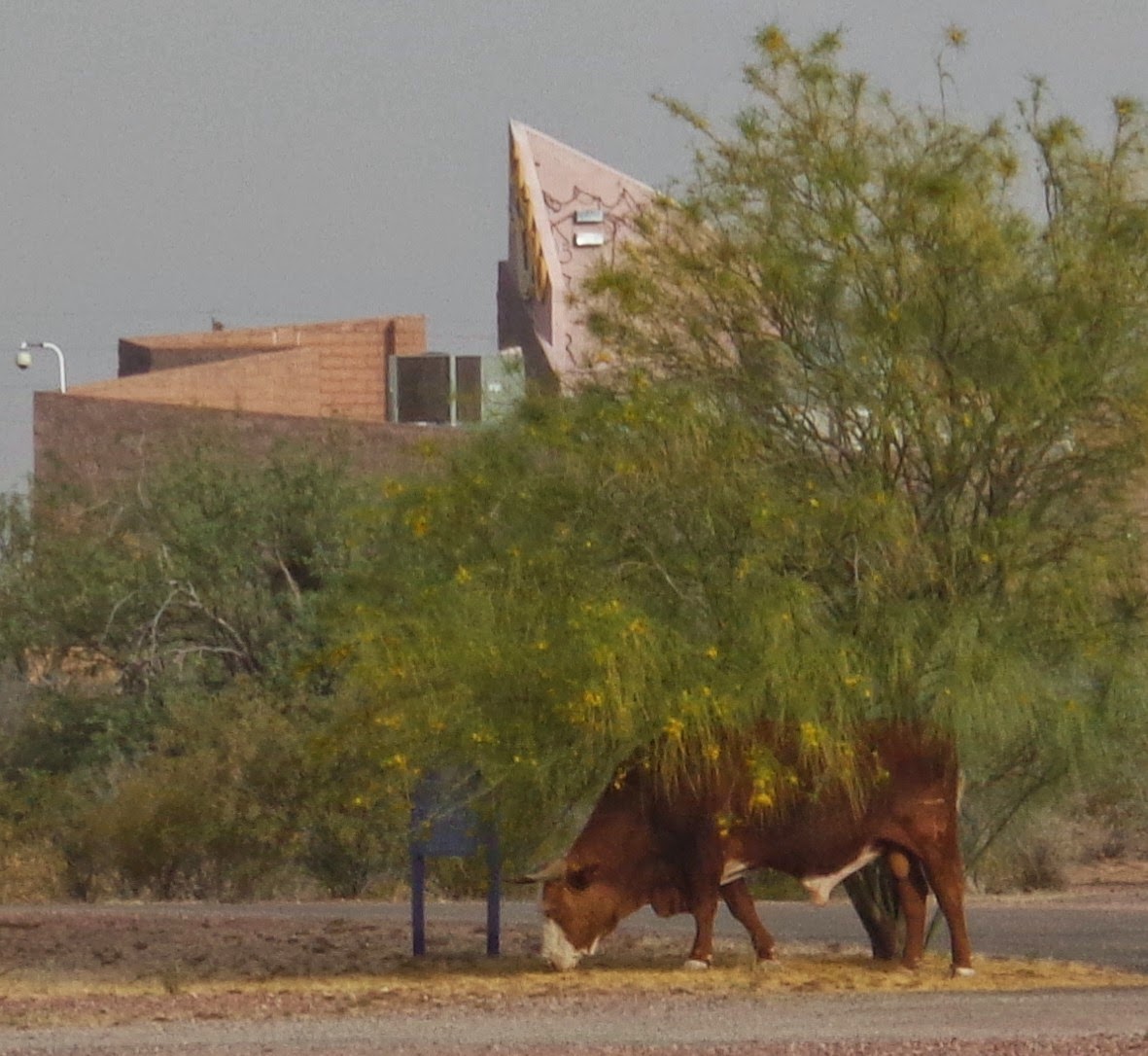 Chillaxin' at the Tohono O'odham Nation 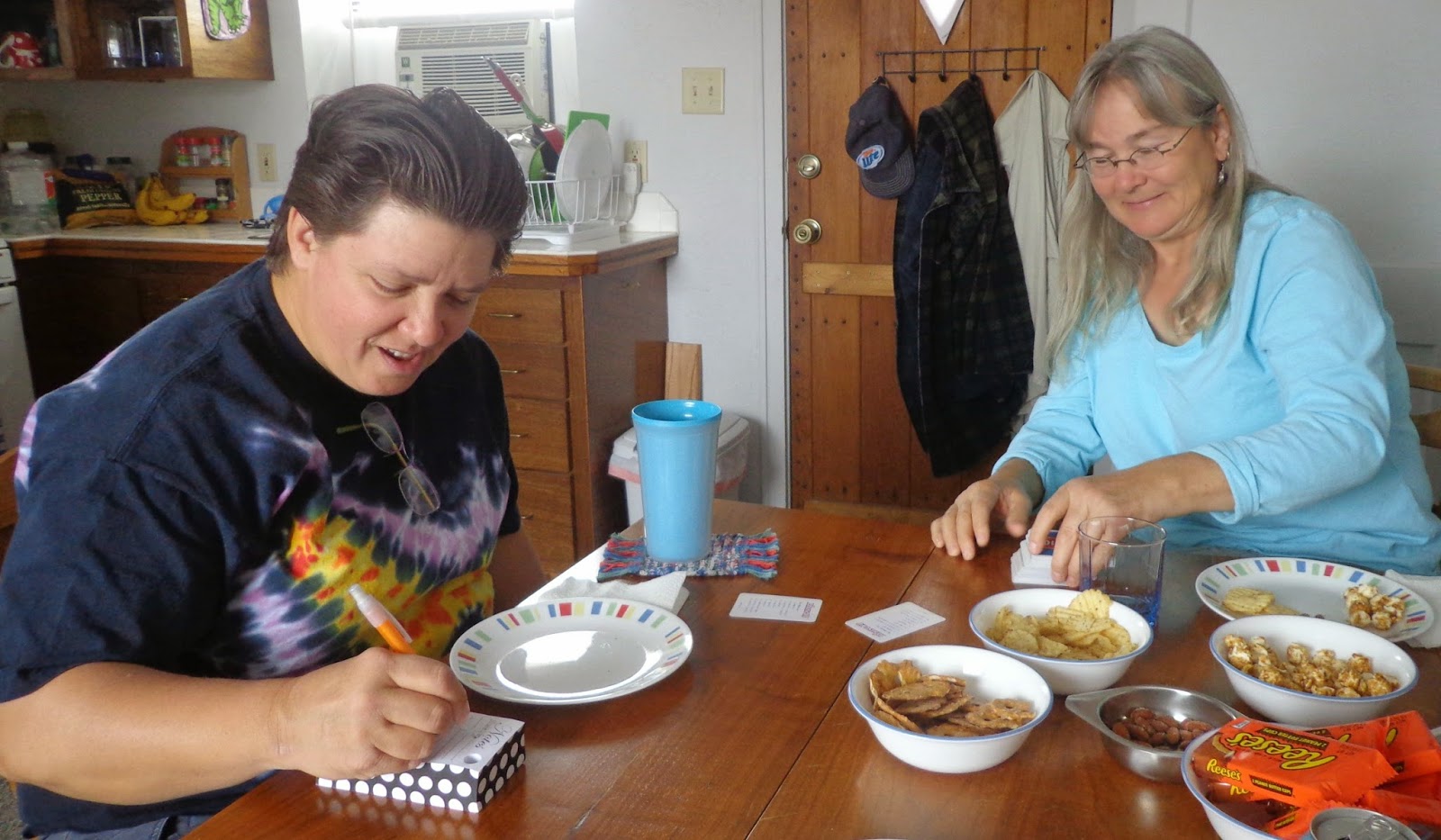 Playing cards with Janice and Misha in TorC

So in my last post, I was about to head off to Truth or Consequences, New Mexico, for a solo art show at January's.

I knew my Geo Tracker needed some work.  Specifically, I wanted to get a relay replaced so that the air conditioning would work on my trip.  But then the mechanic warned me that, if it was his vehicle, he wouldn't drive it on a trip that was 1000+ miles without first replacing the CV axles. 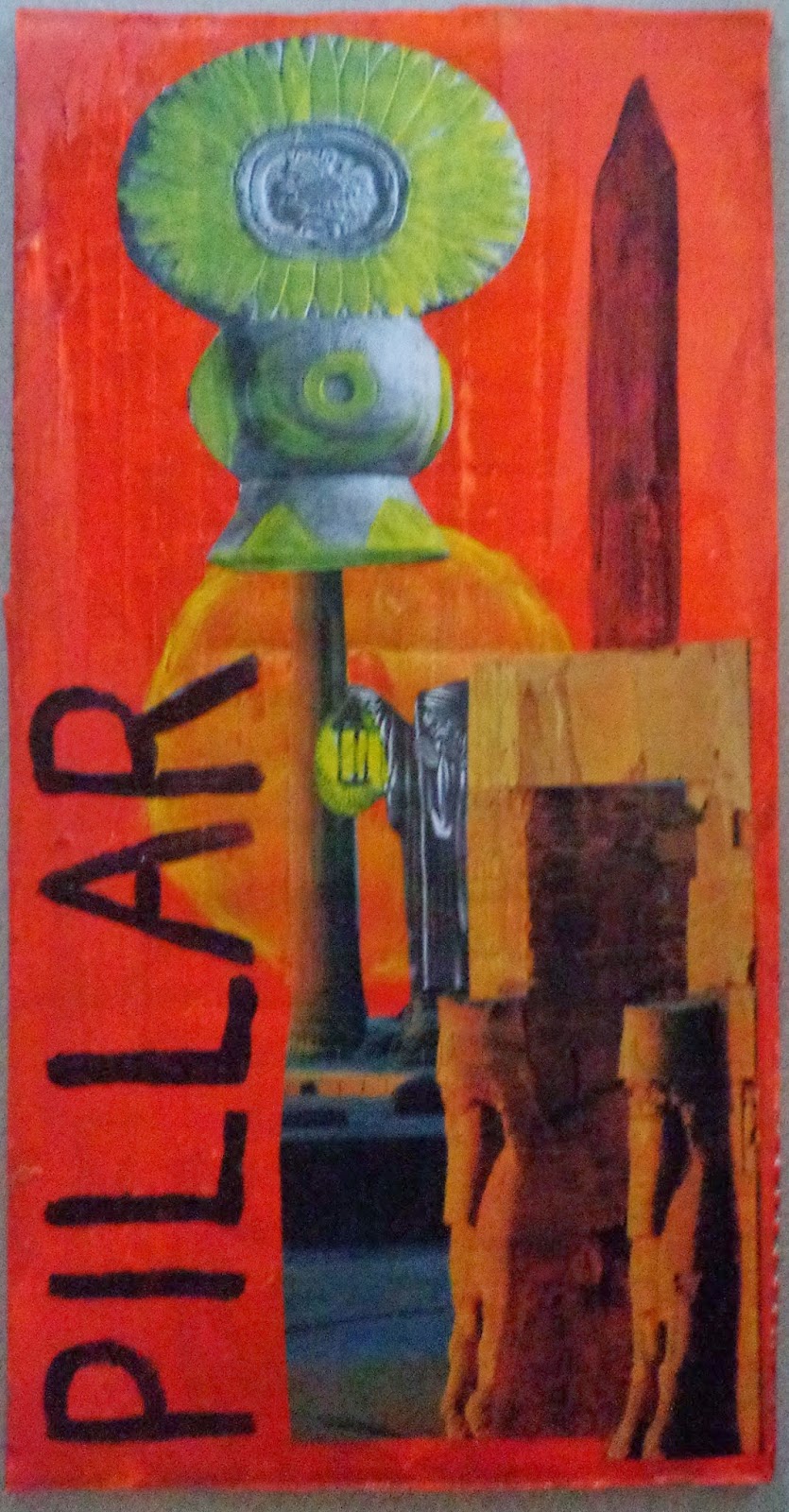 Well, there simply wasn't enough time to do this repair before I had to leave, so Steve drove me to Tucson where I could rent a car.  I got a very good deal through Priceline--less than $200 for about 10 days' use with unlimited mileage, and Enterprise upgraded me to a very comfortable, brand-new Chrysler 200 because it was the only car they had on the lot when I arrived.  I enjoyed driving that baby!  Great A/C, great radio, comfortable seats, and, unlike the vehicles I usually drive, this car could drive as fast as the speed limit.

So, with a nice new car to drive, the trip to TorC was easier than I'd anticipated.  I had a great time staying with my friend Janice and trying to catch up with as many friends as possible over just a few days. 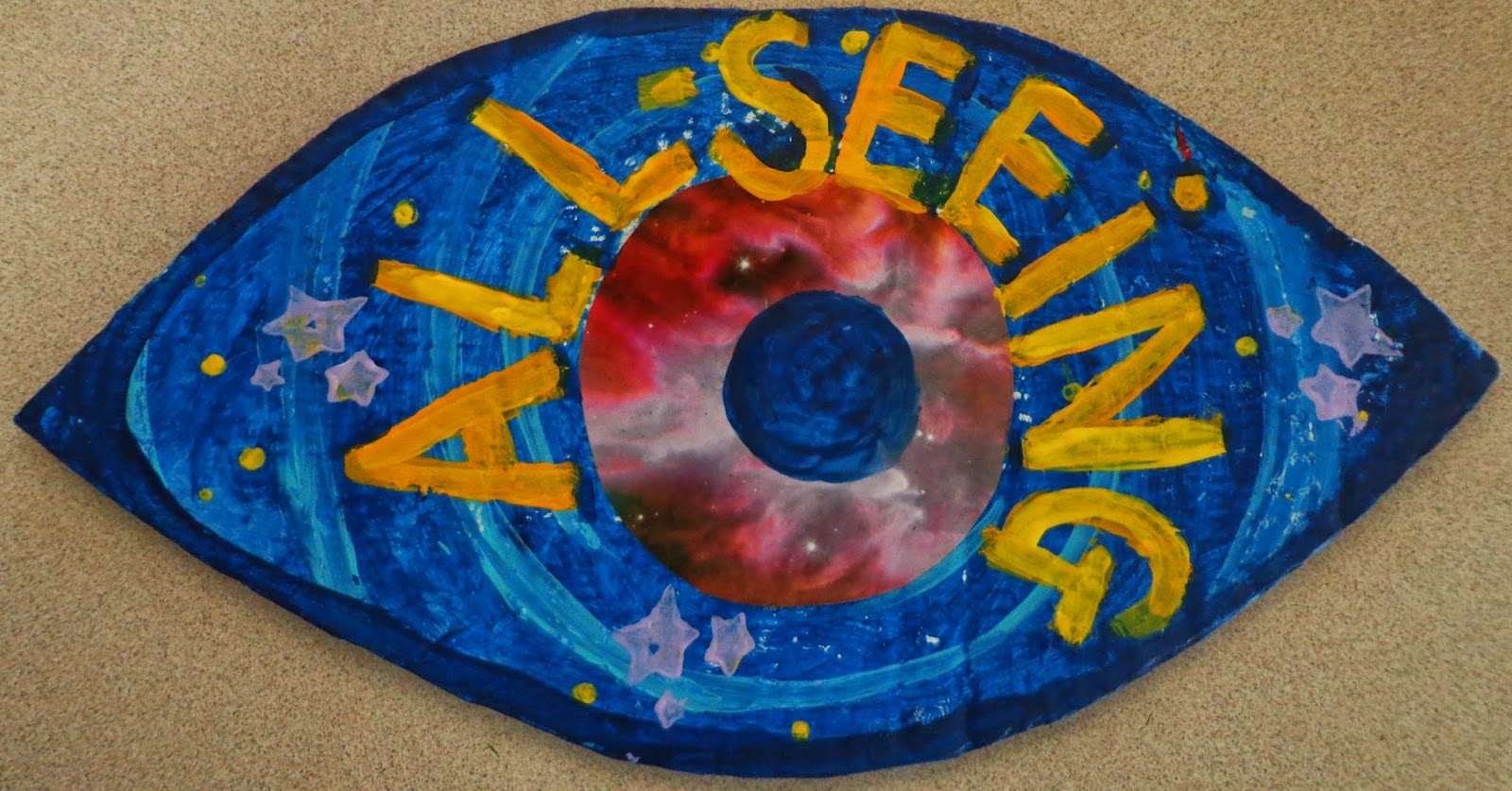 My opening went very well, and I had so much fun!  Many of my friends came and some spent the entire evening.  When January closed the store at 9 pm, a few of us stayed a little longer for tarot readings, and it was great fun.

I went home by way of Phoenix where I won my stupid MVD hearing.  Now I will be entitled to title and register my Tracker in Arizona, as soon as I get the judge's order that removes the restitution lien from the car.  Any day now.  That's what he said.  A couple of weeks ago. 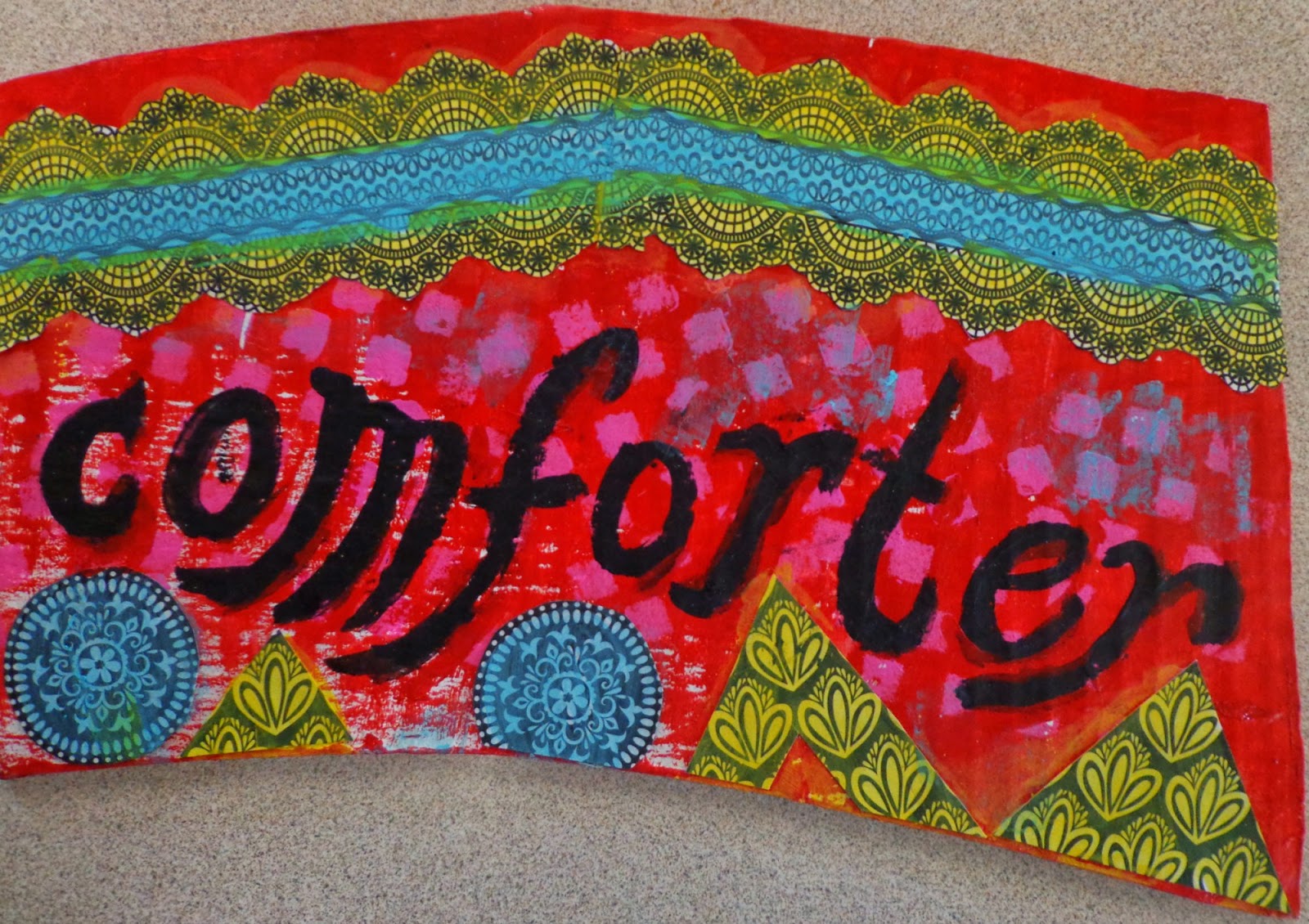 I really enjoyed driving the back roads from Bowie, AZ, up north to Phoenix, rather than staying on boring I-10 all the way.  The highlight of my trip home was stopping at the Apache Gold Casino Resort in San Carlos, Arizona, just five miles east of Globe.  I had a beautiful king room for $59, and I took a dip in the hot tub and watched swallows flying around as the sun set.  Really nice.  For joining the players' club, I got a free breakfast and $20 in free slots which took all of about 4.5 minutes to lose. 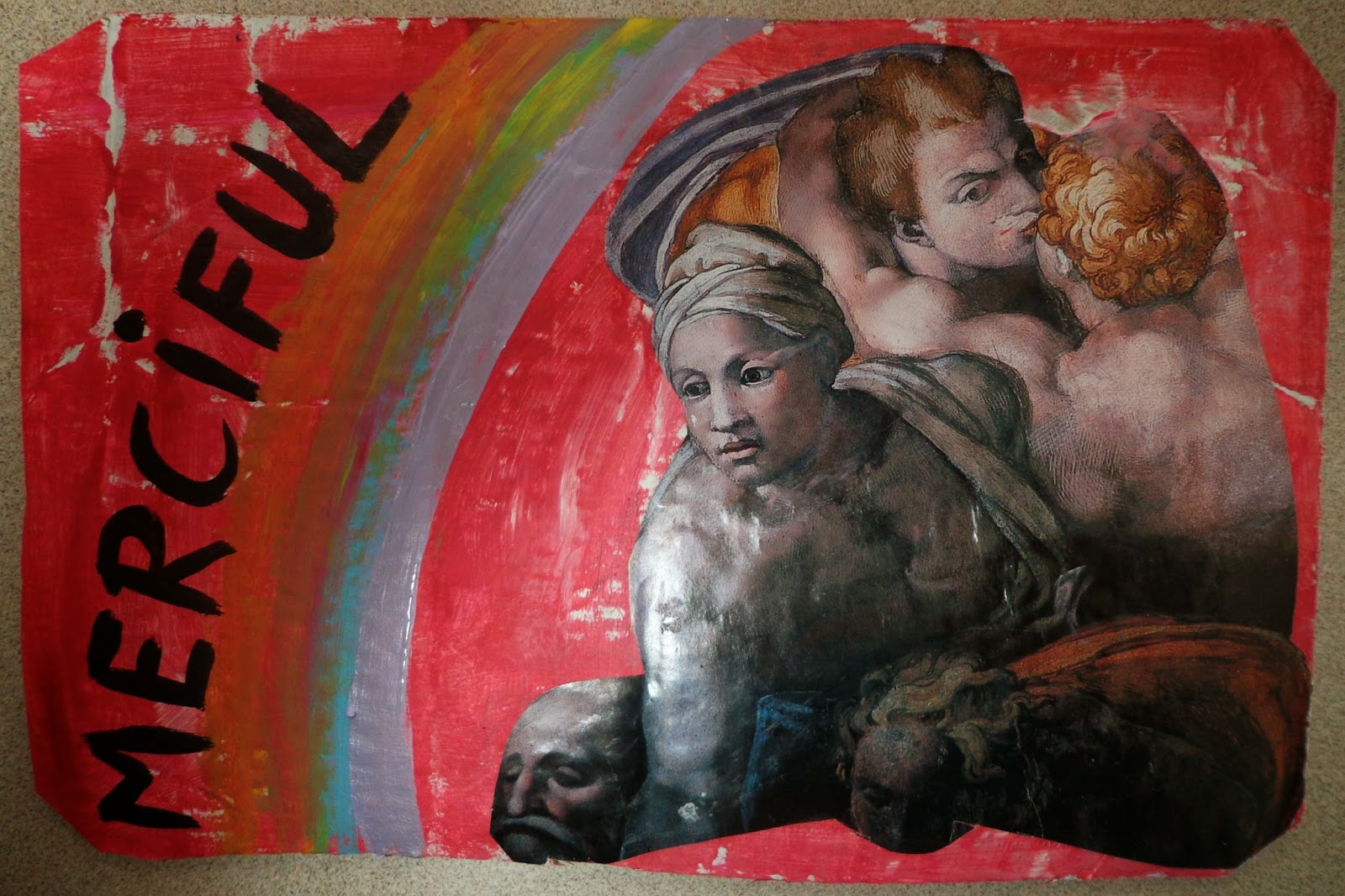 Since getting back home to Why, it's gotten up into the 90s, but we're not ready to leave this area yet.  Steve has to update his insurance eligibility at this time each year--always right when it's getting too hot to want to stay here any longer--and now I seem to be on the same cycle, as I'm waiting to hear (any day now) whether I'm covered by AHCCCS, Arizona's medical assistance plan.  So we are waiting around, because we need to be at a residential or street address (rather than, say, a PO box) until our insurance matters are settled.  The State is not flexible on stuff like this.  Recently I got a form asking for more information, and, if I hadn't received it and filled it out and returned it immediately, I would have been up a creek.  So here we sit for a while.  Weeks or a month or how long, we don't know.

This is the first year I've been in Why, AZ, late enough to see the saguaros in bloom.

But the really good news is that we've moved to an RV park just down the road from our home at Coyote Howls, a primitive campground with no electrical hookups and hence not enough power to run an air conditioner.  Now we're hooked up at Hickiwan Trails RV Park on the Tohono O'odham Reservation.  I would strongly recommend this park to folks who are interested in traveling in this area, but maybe aren't set up to provide their own electricity with solar panels and/or generators.  It's inexpensive ($85 per week or $285 per month for a full hookup site, including electricity) and it's very pleasant.  It's particularly nice right now, because the snowbirds have all gone back north, and there are just a few of us stragglers still here.

It took me a few days to turn the Beluga back into a place to live, after using it all winter as an art studio.  I packed up a lot of stuff and then we took the short drive to the new RV park, stopping for propane along the way. 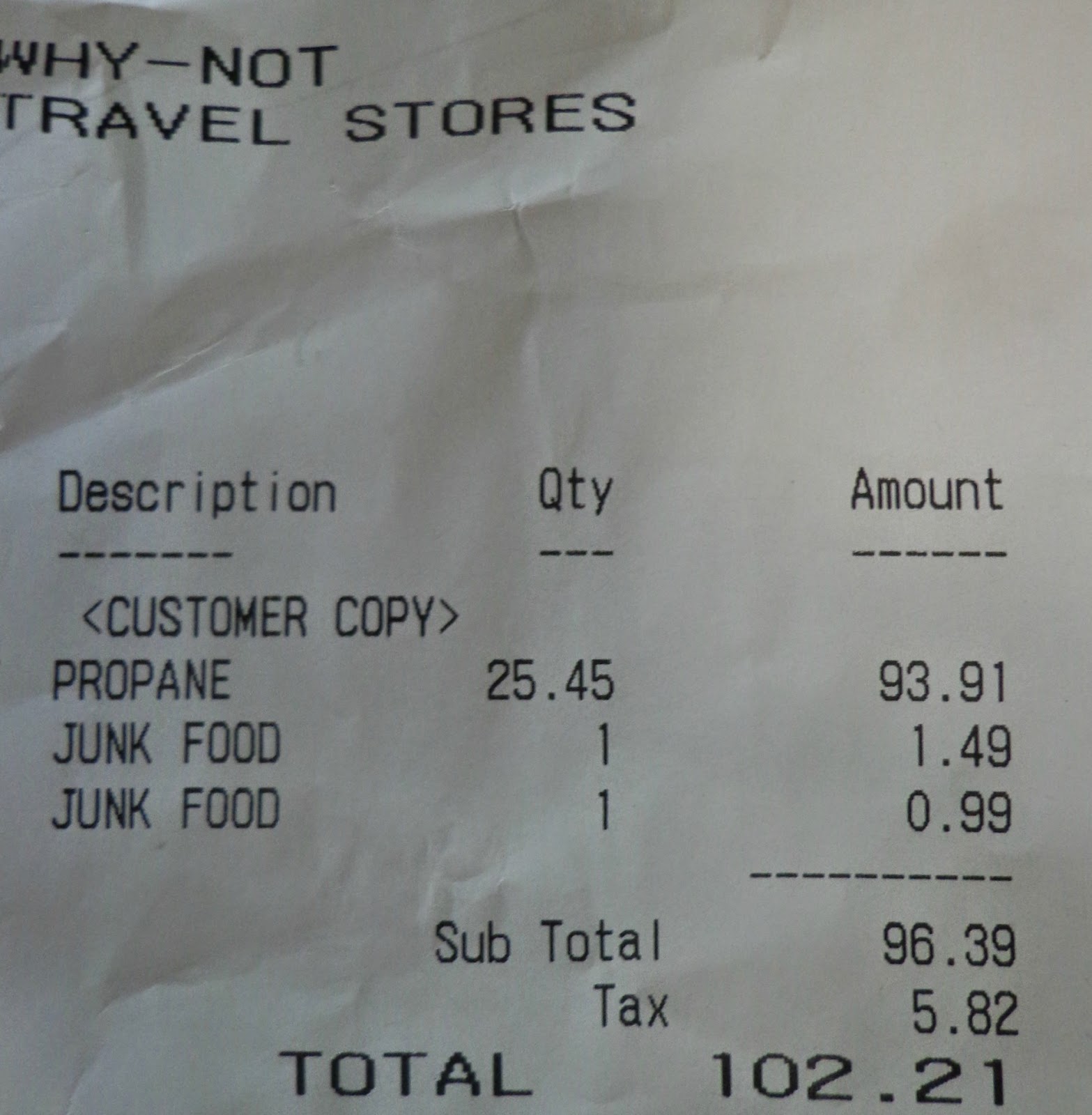 Now that we're settled again, Steve has taken off for his monthly visit to see friends and relatives in Tucson, and I'm here by myself for a few days, beginning work on new projects.  The pieces you see throughout this blog post are mixed-media panels that will be part of a larger installation in December.  It's going to be an art production kind of year. 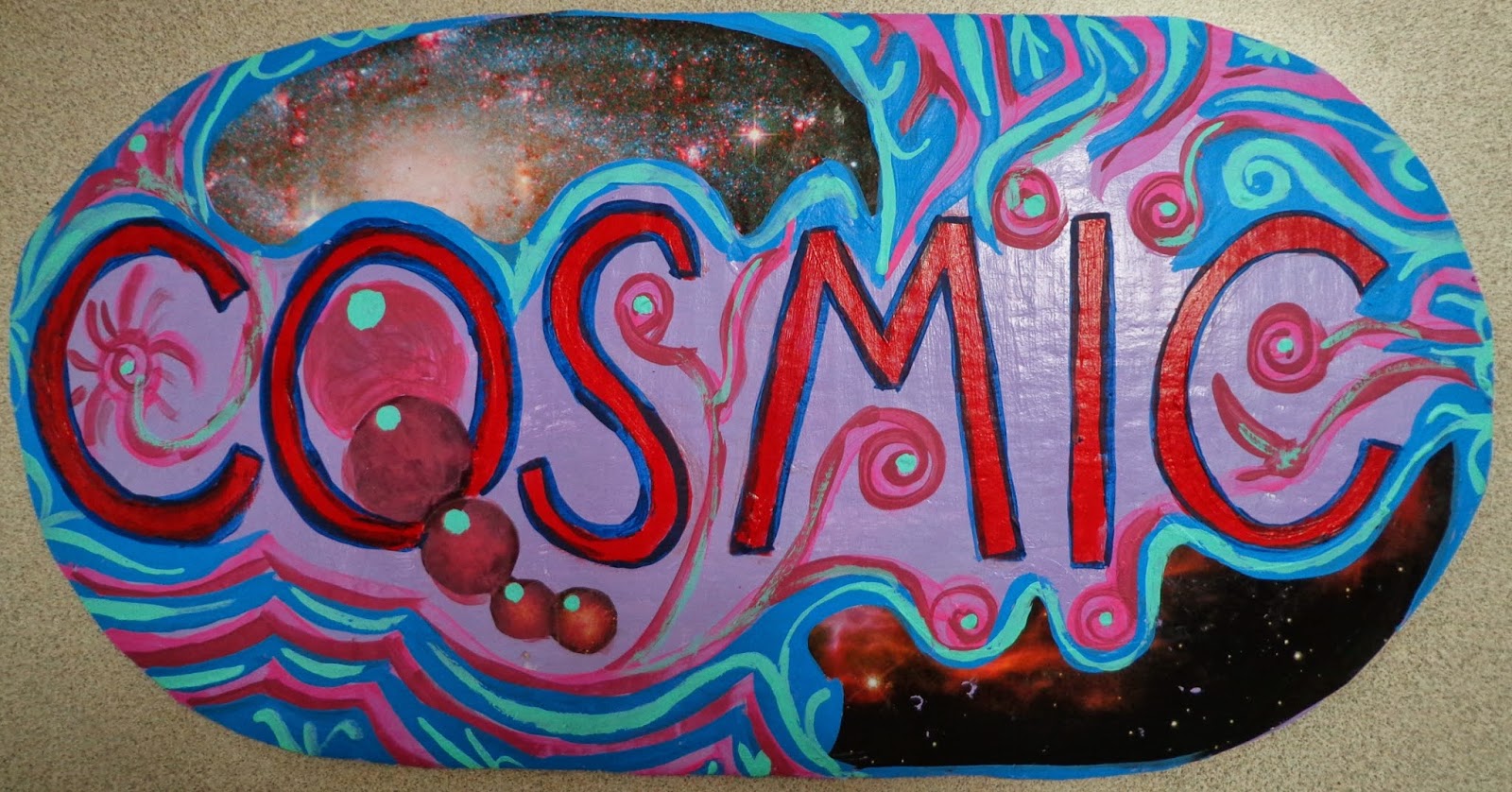