Our Quick Trip Home: 5 Free RV Overnights Along I-10, Florida to Texas 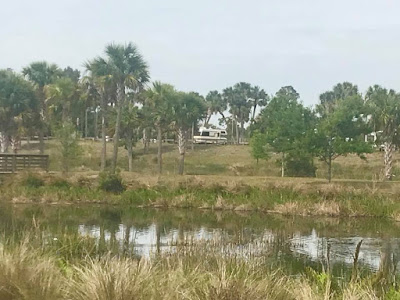 Brownie from across the storm water remediation pond at Phipps Park, Stuart, FL

When I wrote about three-and-a-half weeks ago, we were camping at Phipps Park Campground, a very nice county park in Stuart, Florida.  We were going to drive Brownie, my 20-ft 1984 Lazy Daze mini-motorhome, back to St. Lucie Automotive in nearby Fort Pierce for a transmission-related repair on Monday morning (March 26).  We had an embarrassing amount of blue smoke coming out of the exhaust pipes, but we thought it would be a quick fix (a transmission modulator) and then we would happily drive home via I-20, doing some sightseeing along the way.

But no, it was not to be as we envisioned.  First off, when we drove in the dawn on Monday to the mechanic, with the blue smoke billowing behind us, we started to lose power.  Steve was driving, and he got us safely to an empty parking lot, where we could call our roadside assistance. Brownie was towed again!  A friend suggests she has a thing for tow trucks and lifts. 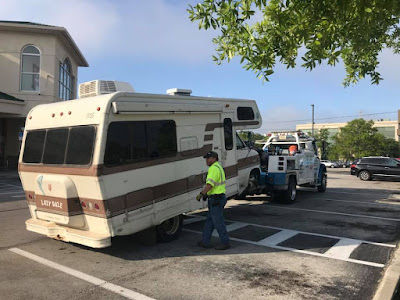 Brownie being towed in again

Next, when they got into the transmission oil pan, they found metal shavings from our transmission, indicating that Brownie needed a new rebuilt transmission.  They told us we could maybe drive home to New Mexico and get the work done with the mechanic I normally go to.  But maybe not. Well, I wasn't willing to take that risk.  I respected the mechanic we were working with already, so I decided to delay our return and stay to get the work done.

The blue smoke problem ended up taking two days, not one, so we spent another night in a hotel.

Things got worse.  Due to some aftermarket changes done to the exhaust system, the mechanics couldn't get to the part of the transmission that identified which of two possible kinds it was.  So, that meant they couldn't order the new rebuilt transmission until they actually tore apart the existing one to identify the right part.  This entailed a pretty substantial delay, due to having to order the part and then leave Brownie up on the rack until it arrived within an unknown number of days.

Since the blue smoke modulator repair was done, we were free to use Brownie again for a few days, so we went back to Phipps Park and really enjoyed several days of relaxation.  We could drive Brownie around a little, so we went into town and saw some local beaches and ran some errands.  Steve saw alligators at Phipps Park, which is adjacent to a storm water treatment area (what I thought was a lake, it's so beautiful).

Then we had to drop Brownie back off at the garage on Monday (April 2) for her time up in the air.  This time, we knew we'd be staying at least two nights and perhaps as many as four.  So we picked a little nicer hotel, a Holiday Inn Express which had a pretty decent breakfast and nice grounds.

I have some advice for anyone that finds themselves in this sort of situation on the road.  If I had it to do over, I would have picked a hotel or motel that was closer to where there were interesting things to do.  We picked hotels based on where the garage was, and there was nothing around us except other hotels and some fast food places. Now I realize I could have gotten us a room down by the beach where we could have sat outside and looked at beautiful things and gone out for coffee and stuff.  I don't think it would've been any more expensive, because we ended up using Uber to get out of the hotel once in a while, and that can run $25-30 round-trip.  Also, a rental car would not have been all that expensive.  I didn't consider doing that because I wrongly assumed it would be expensive, and daily rental might have been about the same as one round-trip using Uber. 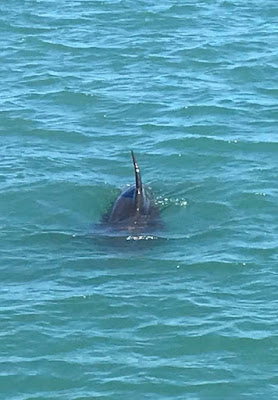 We saw dolphins on a manatee cruise in Ft. Pierce!

Well, live and learn.  I do that a lot.  The replacement transmission came in surprisingly fast and we were out of the hotel after a three-night stay on Thursday, April 5.  We picked up Brownie at about noon and made our way north first on the Florida Turnpike and then on the freeway.  Because of the repair delays and costs, we needed to skedaddle home on I-10, without taking the time to see any tourist sites.  Steve wanted to do the majority of the driving, because he's comfortable driving faster than I am.  We figured we could drive about 300 to 400 miles per day.
So here are the five places we stayed for free along I-10:

Thursday, April 5...Walmart at Live Oak, Florida.  It is posted No Overnight Parking, but all of the Internet sites that address Walmart availability had reviews saying that parking here is no problem.  It was quiet and we had no problems staying here. 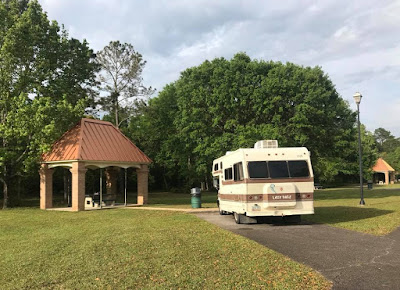 Our campsite in the rest area at Moss Point, Mississippi

Friday, April 6...Mississippi Welcome Center, Moss Point, MS.  This is the Best...Rest...Area...Ever.  Seriously.  There are actual campsites with covered picnic tables, paved pads, and garbage cans, behind the truck parking area.  It is supposed to be a picnic area.  I doubt most people driving cars even realize it exists, though, because it's beyond where the big trucks park and a little tricky to get to, with only one little sign.  If you check in with security, you can stay there one night.

Saturday, April 7...Chambers County Rest Area, Hankamer, Texas (west of Beaumont).  Runner Up for Best Rest Area Ever.  There is a nice big parking area for trucks.  We parked at the far end of it, away from the trucks, and had easy access to the bathrooms.  The really awesome thing about this rest area is the beautiful boardwalk with picnic tables and information about wildlife.  It's like being in a park.  That said, use your bug spray, because I didn't, and I paid the price.

Sunday, April 8...Rest Area, I-10W, Kerrville, Texas (about an hour northwest of San Antonio).  This was not a huge modern rest area like the two previous nights' stays, but it was fine.  There was a free dump station and potable water!  I was glad to use them, because otherwise I would have had to do that immediately on our return to Truth or Consequences, New Mexico. 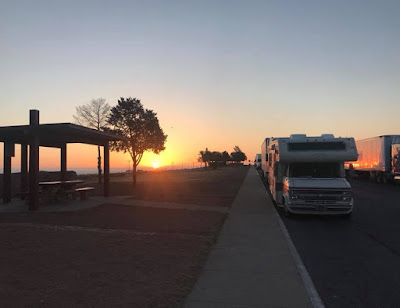 Van Horn Rest Area sunrise on the day we got home to Truth or Consequences, NM

Monday, April 9...Rest Area I-10 W, just east of Van Horn, Texas.  Another older, smaller rest area, but it was fine for us in a small RV.  We saw another picnic area on the west side of Van Horn that might have been quieter, with fewer big trucks.

All of these nights were free, which was a great help after the expenses of the huge repairs in Florida...water pump, radiator, and transmission being the major ones.

Since getting back here to Truth or Consequences on the day we left Van Horn, I've been busy with work.  Almost immediately, it was time to open Sun Gallery for Second Saturday Art Hop weekend.  I stayed behind the gallery and worked four days, then escaped to nearby Damsite Campground for a couple of nights of relaxation after the work weekend.

RV repair expenses are cutting into my plans, but now some awesome new things are happening instead.  One thing is that the Rubber Tramp Art Community, the intentional community for nomadic artists that grew out of this year's RTArt Camp, is planning a spring gathering May 15 through 21, probably in northern New Mexico.  I can't afford to do pottery in Santa Fe all summer as I had wanted, but I can go to my community's gathering and do some other travel while I'm up north. 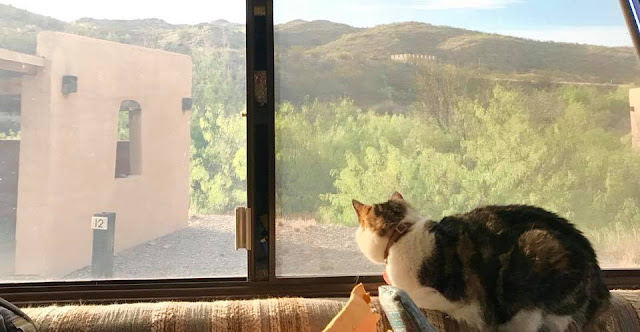 What, no cat pic?!  Here I am at the Damsite Campground in TorC